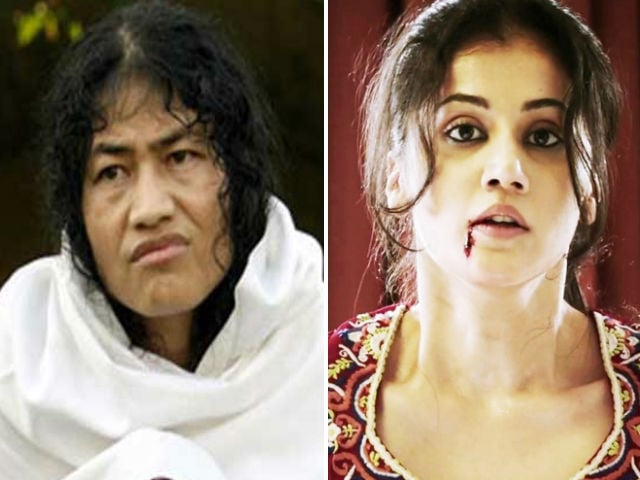 Mumbai: Actress Taapsee Pannu has revealed she has been approached for a biopic on Irom Sharmila, the civil rights and political activist from Manipur.

There were reports that she has been signed for the film, but the Baby star says she is yet to read the script.

"I have been asked, but we are figuring out time when will I go and listen to the script because I've been running around with these things (promotions). Once Pink releases, I'll hear it and then see," Taapsee said in an interview.

Manipur's 'Iron Lady' Irom Sharmila had broken her 16-year-old hunger strike, the world's longest, last month and declared that she wants to become the chief minister so that she could repeal the contentious Armed Forces Special Powers Act (AFSPA).

On the charge of attempting suicide by means of a fast unto death in 2006 at Jantar Mantar in New Delhi, she has been arrested, released and then re-arrested from time to time.

During her fast, the 44-year-old rights activist was force-fed through a nasal tube to keep her alive at a government hospital, a room which was turned into a jail for her.

She was also granted bail by a court in Imphal after she promised the magistrate to break her fast against AFSPA.

Taapsee says it is a big responsibility to take on the role of Irom Sharmila as she may face some backlash too.

"It is too big a responsibility in a lot of other ways. I have to analyse a lot of other things before I take that up. I don't want to face backlash, which it will get if I do that role. There are a lot of things I have to consider. So let's see," the 29-year-old actress said.

Taapsee is currently awaiting the release of her next film, Pink, also featuring Amitabh Bachchan.

Promoted
Listen to the latest songs, only on JioSaavn.com
The drama film, directed by Aniruddha Roy Chowdhury and produced by Rashmi Sharma and Shoojit Sircar, is scheduled to release on September 16.