Taapsee Pannu On Why She's Not Invited To Koffee With Karan: "My Sex Life Isn't Interesting"

Taapsee Pannu will be next seen in Dobaaraa 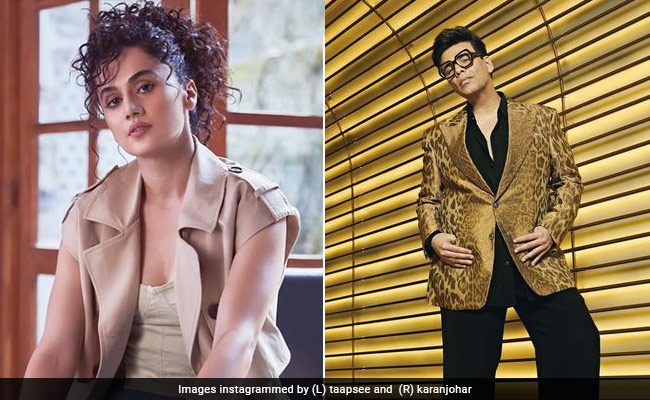 Taapsee Pannu, who is busy promoting her upcoming movie Dobaaraa, recently, during one such promotional event, took a dig at Karan Johar's popular chat show Koffee With Karan. At the event, a journalist asked the actress why she never gets invited to Koffee With Karan. To this, the actress jokingly said, "My sex life is not interesting enough to be invited on Koffee with Karan". In the recent episode of KWK 7, KJo was roasted by his guests Kareena Kapoor and Aamir Khan for asking about celebrities' sex lives.

During the show, Karan Johar asked Kareena Kapoor about her sex life after having babies. To this, the actress replied that he would know, considering he too has kids Yash and Roohi. On hearing this, Karan said, "You are talking badly about my sex life, my mother is watching this show." Aamir Khan immediately questioned him, "Your mother doesn't mind you talking about other people's sex lives? Kaise sawaal pooch raha hai (What are these questions)?"

Coming back to Taapsee Pannu, her upcoming film Dobaaraa is helmed by Anurag Kashyap and produced by Ekta Kapoor. The movie opened at one of the prestigious film festivals - the London Indian Film Festival. The mystery drama also stars Pavail Gulati and M. Nassar in pivotal roles. The movie is the remake of the 2018 Spanish film Mirage. It is slated to hit the theatres on August 19.

Meanwhile, on the work front, Taapsee Pannu was last seen in the sports biopic Shabaash Mithu. Apart from Dobaaraa, she also has Rajkumar Hirani's Dunki with Shah Rukh Khan.