Directed by Abhishek Sharma, Suraj Pe Mangal Bhari is all set to release on Diwali this year 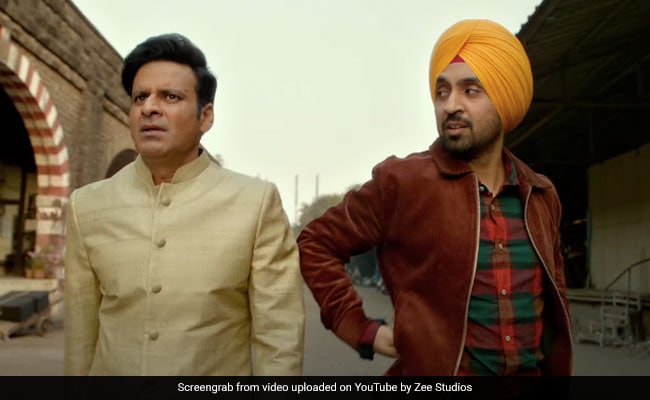 Diljit Dosanjh shared the trailer of his new film Suraj Pe Mangal Bhari on Wednesday and in doing so, he described his character Suraj as the "most eligible bachelor of India". Few minutes into the trailer reveals that the "most eligible bachelor" tag is what Suraj Singh Dhillon has assigned himself because he is far from it. The trailer introduces Suraj as the heir to his father's milk business, which makes way for a few bizarre dialogues, which appear to be forced attempts at infusing humour. Suraj is in search of a life partner and just as his wedding date is about to be fixed, his would-be in-laws are handed over photos of him drinking.

Enters Manoj Bajpayee and the trailer gets back life. Manoj Bajpayee is the titular Mangal of the second half of the film's name. He is local detective, who runs a background check on would-be grooms and takes great pleasure in being instrumental in calling off weddings. Suraj, determined to take revenge, starts dating Mangal's sister played by Fatima Sana Shaikh. Madhu Mangal Rane loses his calm when he realises Suraj's evil plans and tries to get his sister married off to someone else.

Manoj Bajpayee, as an always-angry-and-bitter detective, clearly overshadows Diljit Dosanjh through the length of the trailer. The cast of the film also includes names such as Annu Kapoor, Shriya Pilgaokar, Vijay Raaz, Seema Pahwa, Karishma Tanna and Abhishek Banerjee, among others.

Directed by Abhishek Sharma, Suraj Pe Mangal Bhari is all set to release on Diwali this year.