Sunny Leone, Please Explain This Behaviour. She Did And We Can't Stop Laughing

The actress resumed shooting for the South Indian film Shero this month. 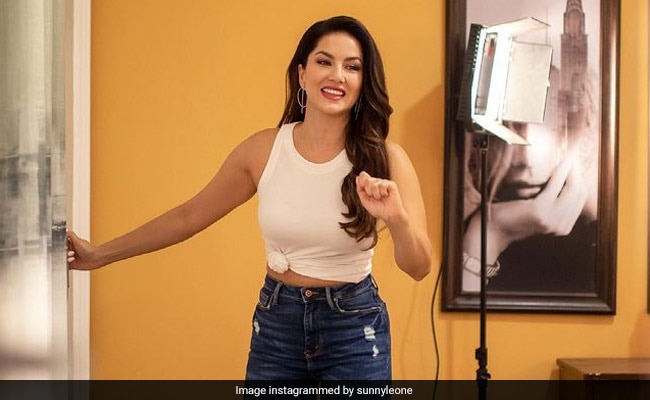 Acting before the camera is not all the struggle that an actor must face. Sometimes, the pre-production, too, can also put hurdles in the way and you may find actors rolling on the shooting set floor for a solution. Not sure what we are talking about? Well, Sunny Leone is rolling herself on a dirty floor and we are definitely confused at first sight. The actress has puzzled us all with a video where she is seen in the act and nothing can stop her. But once we hear her reason, we can burst out laughing.

The Jackpot actress is wearing a loose white shirt and a white pair of pants on the set. But, when the actress starts rolling lengthwise in her white costume, she surprises everyone. The video reveals the context. When a person asks the actress what she is up to, she at once replies that she is saving the production cost after the dirt powder in the set got exhausted. Apparently, the actress needs a shabby look and her white clothes must be adequately dirty for the scene. What's a better way to do it than having a fun time wading on the floor like a little child?

When Sunny gets up, she is smiling and content with her endeavours. She wrote in the caption, "A normal day at work," with the emoji of a face with tears of joy. Watch what we are talking about:

The actress is seldom seen without her lively demeanour and she brings it on set. In another video, she is seen engrossed in a game of Ludo. Sunny Leone wrote in the caption that she bet her opponent and was glad that "it all worked out."

Sunny Leone has resumed her shoot for the South Indian film Shero.

What kind of day is she spending while shooting in a new role? Well, she is all pepped up but beware of the pistol she is carrying around.

Meanwhile, the actress has shifted to a new abode in Mumbai with her husband Daniel Weber and their three children. The photos on her Instagram page show them having rich family time. She called it "a new chapter" in their life in India.

No doubt Sunny Leone is having joyful times in her life, be it on or off the set.