Sunny Leone Channels Her Inner Audrey Hepburn In This Pic 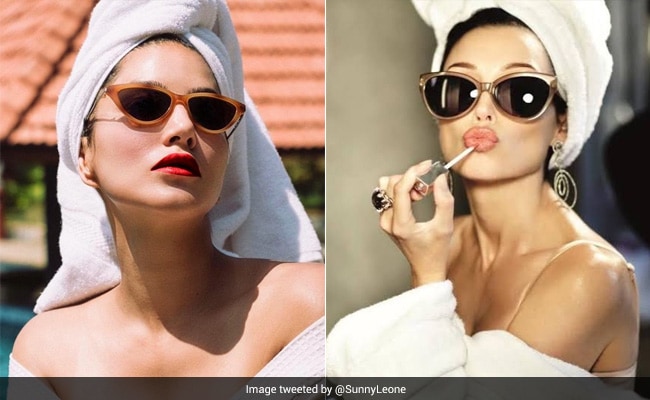 Wait, is that a photo of Sunny Leone or Audrey Hepburn? Sunny Leone paid a tribute of sorts to the iconic Hollywood star in her latest tweet on Thursday, writing about the "power of" fabulous make-up. Sunny Leone owns a cosmetics brand Star Struck By Sunny and often models for her own products. She recently gave off major vacation vibes, posing in a resort robe with her hair tied in a towel. Sunny sported fiery red lips and black sunglasses and her complete look sort of reminded her of... guess who? Yep, Audrey Hepburn. So, she got a little creative and added a photo of the fashion icon to say this: "Even iconic Audrey Hepburn understood the power of the perfect lip shade."

Even iconic Audrey hepburn understood the power of the perfect Lipshade 💋
.
.
Lips: #CherryBomb by @starstruckbysl 💄 pic.twitter.com/KoH9dbaOtE

Sunny Leone is currently in Kerala for the shooting schedule of MTV Splitsvilla 13 and she sent this postcard to her fans from God's Own Country on Instagram, with love, of course.

Sunny Leone recently shared the ROFL video of food review from the sets of MTV Splitsvilla 13. She particularly appeared distracted by the dessert - pineapple pastry - filling up her plate with that in the end.

Sunny Leone currently appears as a co-host on MTV Splitsvilla, which she has been hosting since season 7. The show is currently in its 13th season now. In Bollywood, Sunny Leone is known for starring in songs such as Laila Main Laila, Desi Look, Saiyaan Superstar and Baby Doll. She's starred in films like Kuch Kuch Locha Hai, One Night Stand and Beiimaan Love.