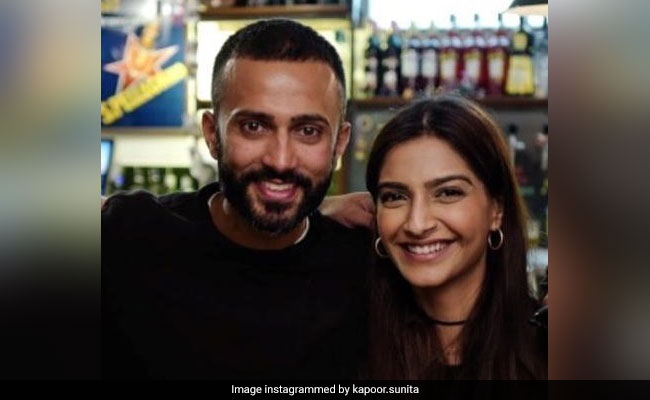 Sonam Kapoor and Anand Ahuja, you two are really, really being missed back home. Sonam and Anand are currently in London, where the couple reportedly own a home. Sonam's mother Sunita Kapoor Instagrammed a photo of Sonam and Anand to say how much she is missing them. Sunita's message for Sonam Kapoor and Anand Ahuja is simple and is guaranteed to make you call up your mom. "Miss you, love you," she captioned the photo and added kiss emoticons. Anand Ahuja was quick to spot the post and responded with heart emoticons. Sonam Kapoor's brother Harshvardhan also saw the message posted by his mother and left a comment on her feed. "Best," he wrote.

Miss you .. love you

Sonam, who has been sharing postcard like entries from London, recently captioned an adorable photo of herself and Anand to say: "My better half and my biggest support thanks for always having my back."

Meanwhile, Anand had also shared a fam-jam photo of Sonam with the Ahujas all the way from London.

" When we have each other, we have everything " #Birthdaycelebrations#Happy birthday Harsh

Sonam Kapoor and Anand Ahuja, who had a big fat wedding in May this year, often feature on Sunita Kapoor's Instagram feed. On Diwali, this is what she wrote for a photo of Sonam and Anand from London.

During her wedding festivities, Sonam Kapoor wrote a heartfelt note addressed to her parents and credited her mother for pulling off the wedding perfectly: "Our family is our strength. Thanks so much Sunita Kapoor, you're the best mom in the whole wide world for making this happen in such a spectacular fashion! Daddy for being so such an amazing host and loving Anand and I so unconditionally," Sonam wrote.

Our Family is our strength.. thanks so much @kapoor.sunita you're the best mom in the whole wide world for making this happen in such a spectacular fashion! Daddy for being so such an amazing host and loving Anand and I so unconditionally @anilskapoor @priya.ahuja27 for going out of your way to do everything and making sure Anand and I get everything we desire! Harish Papa for being our rock of Gibraltar! @rheakapoor for being my best friend and partner and making sure my wedding was a success! @harshvardhankapoor you are my knight in shining armor, you effortlessly took on every responsibility and made sure all our guests were looked after, I love you so much! Pallo, for working tirelessly through and being my third parent! I love you @shehlaa_k @sandeepkhosla @anamikakhanna.in @karanjohar @farahkhankunder @abhilashatd @missdevi for being such amazingly supportive friends who are like family! @poonambhambhani for being an ace mami! My gorgeous Masi @kaveeta.singh for being uber generous and treating me like her own daughter! @ase_msb for bringing the house down with @madstarbase ! @Neeha7 for being my shadow and never leaving my side. @karanboolani for being my brother and best friend! Also to all our friends and family who made it from far and wide at such short notice Anand and I love each and every one of you for loving us enough to want to make it for our big day! Love you all!

On the work front, Sonam Kapoor has films like The Zoya Factor and Ek Ladki Ko Dekha Toh Aisa Laga (in which she co-stars with Anil Kapoor) in the pipeline.