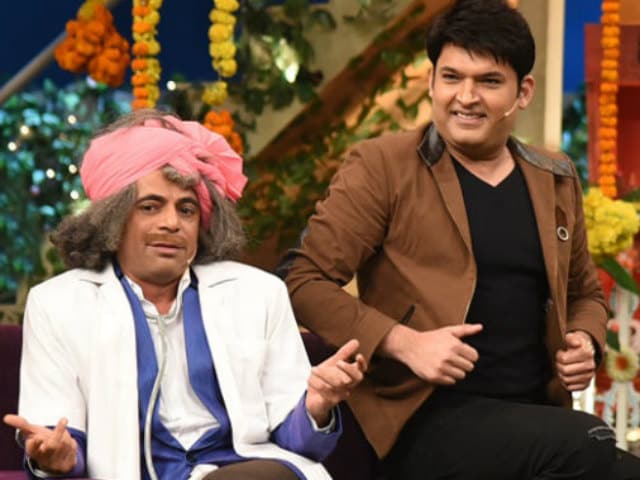 New Delhi: Comedian Sunil Grover did not shoot for Kapil Sharma's show on Monday after allegedly being assaulted by the TV personality on board a flight, reported India Forum. India Forum cited sources close to the production in the report, stating that Mr Grover is no longer part of Mr Sharma's show. This may have changed now, after Kapil Sharma tweeted an apology on Monday night that Sunil Grover appears to have acknowledged. The Kapil Sharma Show is headlined by comedian and actor Kapil Sharma while Sunil Grover played the role of characters like Dr Mashoor Gulati and Rinku Bhabhi. Earlier, he featured as Gutthi in Kapil Sharma's previous show Comedy Nights With Kapil. The actors are believed to have been involved in a showdown onboard a flight recently - Mr Sharma allegedly attacked Mr Grover, say eyewitnesses.

On Monday, it was reported that Mr Grover was on the brink of exiting the show. A source told mid-day that Mr Grover is "numbed" by his co-star's allegedly abusive behaviour. "Sunil is numbed by the way Kapil assaulted him during a flight from Melbourne, where they did a stage show. He was merely trying to calm down Kapil, who was drunk and hurling abuses at another team member, Chandan (Prabhakar)," mid-day quoted the source as saying.

Kapil Sharma wrote a lengthy Facebook post on Monday admitting that he 'argued' with Sunil Grover and downplaying the alleged assault as a 'family matter.' In the post, Mr Sharma addressed Mr Grover as his 'elder brother' and wrote: "We spend a lot of time together rather than our families and sometime it happens in family. It's our family matter. We will sort this out."

The Kapil Sharma Show co-stars were on a flight together on their way back from Melbourne. An eyewitness told Bollywood Life, "Without any provocation, Kapil pounced on Sunil Grover. We saw Kapil loudly abusing Sunil. Sunil kept quiet, probably thinking that Kapil would calm down after the outburst. But Kapil got more aggressive. His loud abuses could be heard right across the flight cabin. He then physically assaulted Sunil. That's when all hell broke loose. The flight attendants rushed to the spot. They wanted to handcuff Kapil in order to restrain him. To his credit Sunil stood by his unruly colleague and asked the cabin crew to overlook his drunken behaviour."

Promoted
Listen to the latest songs, only on JioSaavn.com
Speaking to mid-day, a source revealed that Mr Grover reportedly asked Mr Sharma to stop hurling abuses in the presence of other passengers but he was ignored. "A female passenger asked Kapil to keep quiet, so Sunil told him, 'Paaji tussi gaali mat do'. But, he got provoked and started abusing him. Sunil also got angry and stood up, but the other members stopped him. He then walked to the economy class where Kapil chased and hit him," mid-day quoted the source as saying.

Kapil Sharma Apologises To Sunil Grover After Alleged Fight. But Has It Been Accepted?