Smita Patil, known for her contribution to the Eighties' parallel cinema movement and her brilliant-yet-brief career in films, died a month after she gave birth to a son, 31 years ago 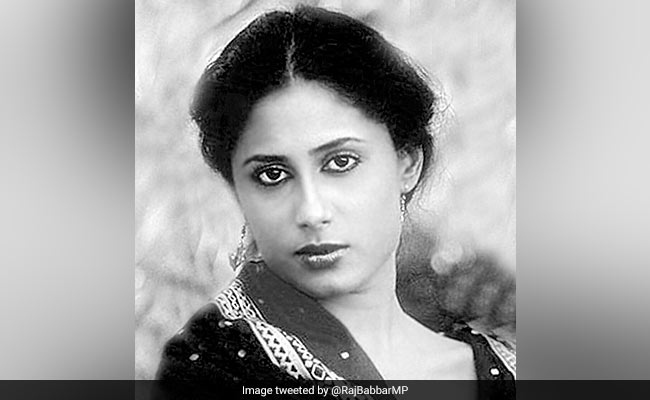 New Delhi: Legendary actress Smita Patil was fondly remembered by her husband, veteran actor Raj Babbar, on her death anniversary on Wednesday. Smita Patil, known for her contribution to the Eighties' parallel cinema movement and her brilliant-yet-brief career in films, died a month after she gave birth to a son, 31 years ago. She was just 31. Smita Patil and Raj Babbar's son Prateik Babbar, who was brought up by his maternal grandparents, is now an actor. Raj Babbar and Smita Patil had a complicated history of togetherness - the actor was married to theatre personality Nadira Zaheer when he fell in love with Smita Patil. After her death in 1986, he returned to live with Nadira, with whom he has two children - Juhi and Arya - both actors.

31 years after her death, Raj Babbar tweeted he still misses her presence and even today, finds it difficult to believe that Smita Patil is no longer alive. "Tumhari anupasthiti par ab abhi yakeen nahi hota," read his tweet.

Raj Babbar (who never divorced Nadira) and Smita Patil's marriage made them the centre of showbiz controversies in the Eighties - a phase which was once described by the actress as "private hell," stated a 2016 mid-day report. Prateik Babbar, who made explosive confessions about being a former drug addict, termed his parents' complicated relationship as "a source of confusion". "Why were things like this? If mom had just lived longer and dad would have spent more time with me... things could have been, actually, would have been, different," he had told mid-day.

Promoted
Listen to the latest songs, only on JioSaavn.com
Amitabh Bachchan, Smita Patil's co-star of 1982 movies like Shakti and Namak Halaal, also remembered the actress on her death anniversary. Sharing an album of photos with the actress, he wrote about when Smita Patil had a bad dream about him just before he met with an accident on the sets of Coolie.

T 2740 - Remembering Smita Patil on her death Anniversary .. memorable films with her Shakti and NamakHalaal ..
She had a premonition of my Coolie accident a night before it happened .. called and told me of it .. pic.twitter.com/cQMrcYCf7W

Smita Patil will be remembered forever for her roles in iconic movies like Arth, Manthan , Bhumika and Mirch Masala, which was her last project before she died and released posthumously. Nazrana, Avam and Thikana are also some of her films, which released after her death.