"A lot of people have found the courage to talk about their experience after I shared my story on social media," said Sona Mohapatra 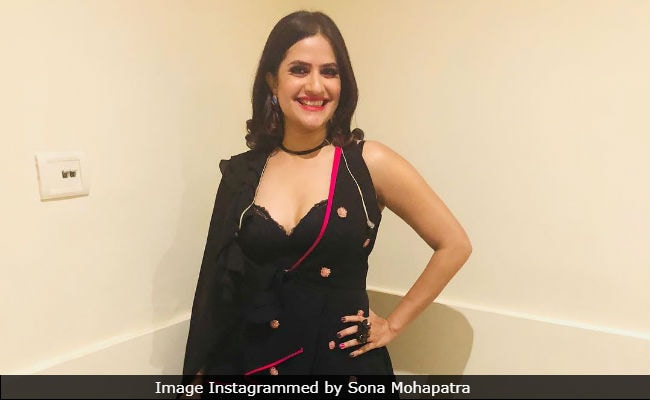 Singer Sona Mohapatra, who has accused playback singer Kailash Kher and music composer Anu Malik of sexual misconduct in her #MeToo account, which she shared on social media last month, said that she "didn't think about her career before sharing her #MeToo story because as it was meant for a "better future of the country," reports news agency IANS. Ms Mohapatra, who will be judging the singing reality show Sa Re Ga Ma Pa, along with Wajid Khan and Shekhar Ravjiani, interacted with the media on Wednesday and told IANS: "I appreciate Zee TV and Sa Re Ga Ma Pa, who gave an opportunity to an outspoken individual like me, to judge their show because when I shared my story, I didn't think about how it will impact my singing or my musical career as it was for the bigger cause of a better future for the country."

The 42-year-old singer, who has voiced her opinion on several occasions in the wake of #MeToo movement, told IANS: "We all want that our country should move towards a positive direction and the garbage gets thrown out of the system and society. We are looking forward to such kind of evenings where we will have genuine celebrations and I think we are all counting on better days."

When Ms Mohapatra was asked if she plans to take legal action against the alleged sexual predators, she said, "The truth is that the ongoing campaign has got collective voice. This movement is happening all around the country." The Bahara singer said that people wish to see a change in the society and that "nobody needs to be a bystander" in this issue. "I am not the only one who is speaking about it. I think anyone, including the media, can file a complaint against these kinds of cases because nobody needs to be a bystander in this issue. A lot of people have found the courage to talk about their experience after I shared my story on social media," IANS quoted her as saying.

This is the tweet that Sona Mohapatra shared last month:

(1) I met Kailash for coffee in Prithvi Café to discuss a forthcoming concert where both our bands were playing & after the usual, a hand on my thigh with lines likes, your so beautiful, feel so good that a 'musician got you' (Ram) not an actor. I left not soon after. (1) https://t.co/Cfz8Hf4sdP

When Kailash Kher was asked about the allegations, the singer offered an apology in an interview last month and told news agency IANS: "I am almost all the time in my own simple world, but in case anyone has taken or thought something differently about anything, then it is my sincere apology. My devotion to music makes me who I am and I am thankful for all the love and support."

In another Instagram post, Sona Mohapatra accused singer-composer Anu Malik of being an offender. "This guy, Kailash Kher is a serial predator and has been for years as are many others like Anu Malik in the industry," she wrote.

To all the young girls & women who are coming out with their experiences with this creep, journalists, 'fans' & even kids from college, know that you are not alone. This guy, #KailashKher is a serial predator & has been for years as are many others like Anu Malik in the industry. I cannot be tweeting about everyone cus I work 18 hour work days & have a life to live & breathe in. Also I cannot comment on many others basis heresay. That would be unfair. (Many journalists have been asking me for stories thinking that I'm most likely to 'spill the beans'. I'm not) It is important that we stick to facts & our personal experiences to make this a serious & credible movement to help clean a system & lopsided power structure. It is just a start but an important one. #TimesUp #India #Change

Anu Malik's lawyer Zulfiquar Memon denied all the allegations against the singer, calling them"false" and told news agency IANS: "The allegations made against my client are emphatically denied as completely false and baseless. My client respects the #MeToo Movement but to use this movement to start a character assassination mission is obnoxious."

The 57-year-old singer-music composer, who is no longer a part of the singing reality show Indian Idol (in which he was a co-judge), released a statement, citing his work as a reason for his exit from the show. "I, Anu Malik, have decided to take a break from Indian Idol as I am currently unable to focus on my work on the show. The channel has been kind to agree for the same. Thank you," read an excerpt from the statement.

The #MeToo movement gained momentum in India, after actress Tanushree Dutta revived the decade old controversy and accused actor Nana Patekar of sexually harassing her ten years ago, while she was shooting for a special song for the 2008 film Horn 'Ok' Pleassss.