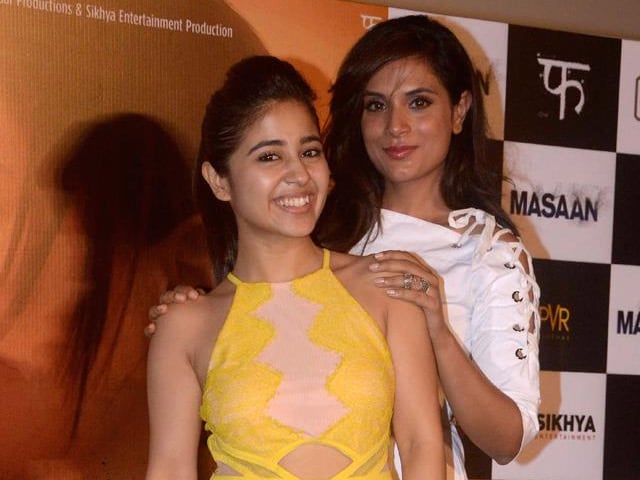 Shweta and Richa at an event in Mumbai.

New Delhi: Actress Shweta Tripathi, who is basking in the glory of her Bollywood debut film Masaan, said that the film industry is competitive and one can easily get lost.

The actress said that the team of Neeraj Ghaywan-film, which also stars Richa Chadha, Sanjay Mishra, and Vicky Kaushal, was supportive. And so, there was nothing to worry about.

"Having a supportive team is one of the most important things. Publicity is very important for any actor, especially when you are new, and people need to know you. Here, you will get lost very easily. It's such a competitive industry. Your film and work make a huge difference, but the secondary thing. Your appearance, what you wear and how you are looking are also important," Shweta told IANS. (Also Read: Deliberately Cast Newcomers in Masaan,' Says Neeraj Ghaywan)

She was oblivious to these things about showbiz.

"I got into the industry because I love acting, but once we started doing promotions (of the film), I was like 'What is all this?'. I've learnt so much from Richa. I didn't even know how to stand properly. I realised that for pictures, you need to stand in a particular way. I was so grateful that I had Richa who was so supportive," she added.

The former TV actress shared that the Gangs of Wasseypur star is "not insecure at all" and never felt that Richa was "trying to take the limelight".

"When you work with someone who is not insecure, that makes you confident. Even Sanjay Mishra used to appreciate us during interviews. I don't have a godfather in the industry so, you need people to support you and these are good actors. Their support means a lot," said the 30-year-old. (Also Read: The Actors Who Were Supposed to be in Masaan But Weren't)

Would she like to do more projects with Richa?

"I would love to. In Masaan, I didn't have any scene with her, but I would love to share screen space or stage with her and it will be so much fun," said the actress, who believes that an artist is responsible to bring out stories that are true.

Of her character in Masaan, in which she falls in love with a boy from lower caste, she said that she didn't worry about controversies.

"The pressure was that, it is one of the most beautiful love stories. So, my whole thing was that I had to bring this on screen," she said.