Shubh Mangal Saavdhan Trailer: Ayushmann Khurrana's Problem Is The Opposite Of Vicky Donor 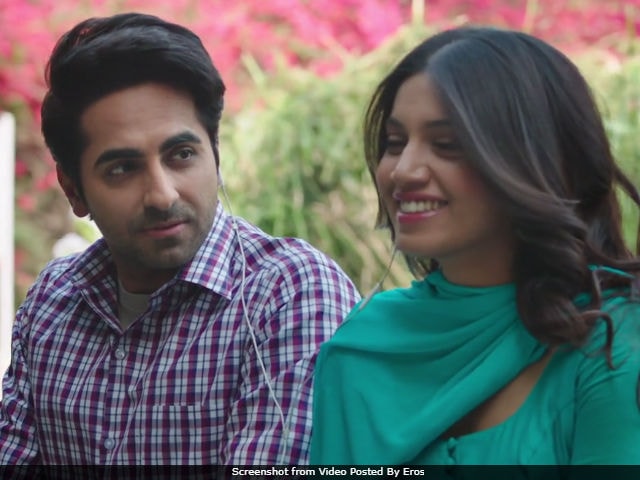 New Delhi: Ayushmann Khurrana and Bhumi Pednekar are all set to present their unique love story in Shubh Mangal Saavdhan, their second film after 2015's blockbuster Dum Laga Ke Haisha. With the new trailer of Shubh Mangal Saavdhan, both the actors gave us a sneak peek of what their film is all about. Gurgaon-based sales manager Mudit (Ayushmann Khurrana) falls in love with Sugandha (Bhumi Pednekar). Later, their families agree to get Mudit and Sugandha married. However, Mudit is dealing with a 'gents' problem,' which Sugandha isn't aware of. The two-and-a-half minute video opens on Ayushmann's character, who along with his would be father-in-law goes to a doctor, to share an incident when he and Sugandha got 'intimate.' Sugandha's father blasts Mudit for getting close to his daughter before marriage. However, Mudit replies that it was mutual and their love is not 'one-sided.' The film is totally a laugh riot, we bet.

Shubh Mangal Saavdhan is co-produced by Aanand L Rai and has been shot in Delhi and Haridwar. It is a remake of 2013 Tamil film Kalyana Samayal Saadham and is directed by filmmaker R S Prasanna. The film went on floors in March.

Of the film, Aanand L Rai earlier said, "Shubh Mangal Saavdhan is a funny and layered story. These are the kind of stories I've identified with, right from the time I made Tanu Weds Manu. It is a simple narrative with an interesting bend and the reason I cast Ayushmann and Bhumi is that they fit the bill perfectly for this part."