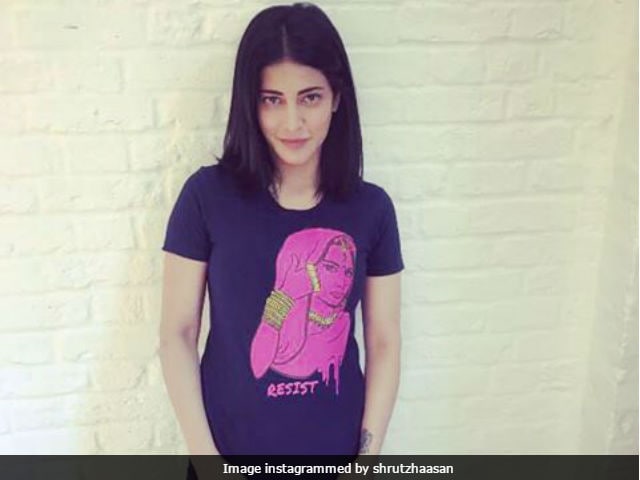 New Delhi: Actress Shruti Haasan is working hard for her upcoming film Sanghamitra, directed by Sundar C. The 31-year-old actress, who is learning sword fighting for the movie, told news agency IANS that her experience has been 'mentally engaging' and 'exhilarating'. Shruti Hassan, who will be seen portraying the role of a warrior princess in the movie, has been training with a professional action choreographer in London. In a statement to IANS, the Gabbar Is Back actress said: "I was so glad to have this opportunity to learn a new physical art form. After having martial arts as part of my life early on, sword fighting was a whole new experience which was physically and mentally engaging and exhilarating."

Recently, Shruti Hassan, who is 'looking forward' to using this new skill in her role, shared a few videos of her training session on social media. See the videos posted by her below

Sanghamitra, produced by Sri Thenandal Films, will be released in Tamil, Telugu and Hindi simultaneously. The film, which also stars Arya and Jayam Ravi in lead roles, will be made on a budget of Rs 150 crore.

In a recent interview to Hindu, Shruti Hassan said that she was 'thankful' to filmmaker Sundar C for selecting her for the role. "All I can say is I am thankful to Sundar sir for selecting me and I've begun preparing for the film," The Hindu quoted the Welcome Back actress as saying.

Shruti Hassan, who is the daughter of actor Kamal Haasan and Sarika Thakur, made her Bollywood debut with 2009 movie Luck, directed by Soham Shah.

Promoted
Listen to the latest songs, only on JioSaavn.com
Shruti Hassan was last seen in Telugu film Katamarayudu, co-starring Pawan Kalyan. She will next be seen in Behen Hogi opposite Rajkummar Rao. The film, directed by Ajay K Pannalal, is scheduled to release in theatres on May 26.