Shilpa Shetty's Undercut Was A Hair-Raising Tale For This Person. See Her Post

Did you 'hair' about Shilpa Shetty's new look? 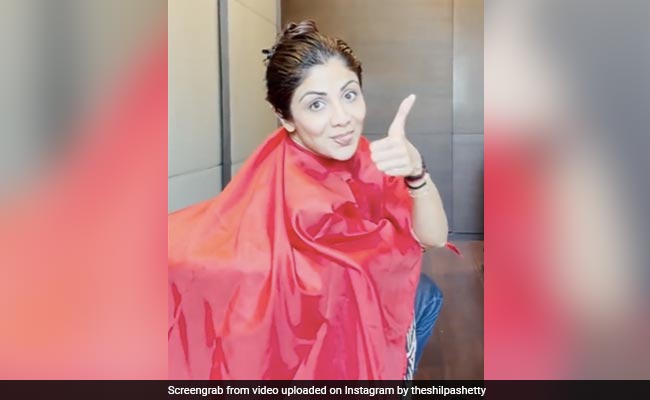 Shilpa Shetty in a still from the video. (courtesy: theshilpashetty)

Shilpa Shetty took a short cut to a stylish hairdo and she has been trending for it big time. The actress recently opted for an undercut and even shared a video of the process on her Instagram profile. The actress, in her caption, also revealed that one person was even more scared than her and it was her hairstylist Abdul Wahid. The actress, sharing the video of her profile, wrote in her caption: "How it happened! Abdul Wahid was more scared than I was!" Shilpa Shetty added the hashtags #Hairrazingdiaries, #undercut, #buzzcut, #reelsinstagram, #reelitfeelit and #reelkarofeelkaro to her post.

On Monday, Shilpa Shetty surprised her fans with her new look and she wrote: "You can't live each day without taking risks and without getting out of your comfort zone: be it going for an Undercut buzz cut (which took a lot of gumption, won't lie) or performing my new aerobic workout: the 'Tribal Squats'. It works on all lower body muscles, shoulders, arm-and-leg coordination, speed and agility, and most importantly - on our brain and body. The routine entails doing 4 sets of 60 seconds each with only a 30-second break in between each of them. Put in the effort consistently to see the difference because like they say, "No Guts, No Glory."

On the work front, Shilpa Shetty was last seen in Hungama 2, co-starring Paresh Rawal, Meezaan Jaaferi and Pranitha Subhash. The film released on Disney+Hotstar. She was also seen as one of the judges on the TV reality show Super Dancer Chapter 4, alongside choreographer Geeta Kapoor and filmmaker Anurag Basu. The actress will next be seen in Sabbir Khan's upcoming film Nikamma.