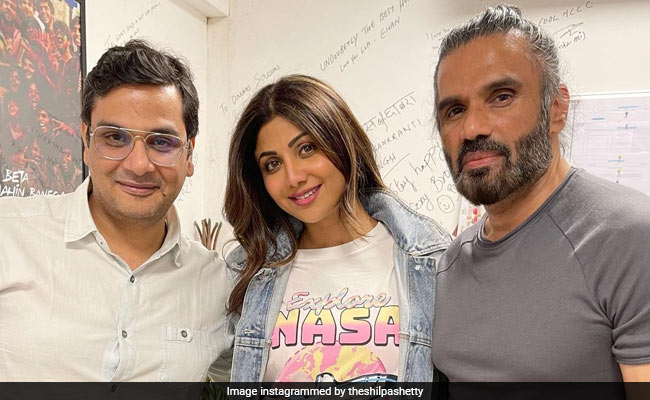 Shilpa Shetty thrilled the internet with a super cool picture of herself and her Dhadkan co-star Suniel Shetty on Wednesday. The duo worked alongside Akshay Kumar in the 2000 film. Shilpa's post also features casting director Mukesh Chhabra. Sharing the picture, in which she looks beautiful in a white top, jeans and denim jacket, Shilpa Shetty wrote: "Dev, Anjali aur Chabbra... purane dost nayi #dhadkan. When two Shettys come together... poor Mukesh Chhabra. What say, Suniel Shetty? #friends #laughs #positivity #workandfun #gratitude." Shilpa and Suniel Shetty's characters in the film were named Anjali and Dev, respectively. In the comments section of the actress' post, her fans wrote: "We miss Akshay sir in the picture" and also dropped several heart icons for the reunion photo.

One of the users wrote: "Too good ma'am" while another commented: "My favourite movie."