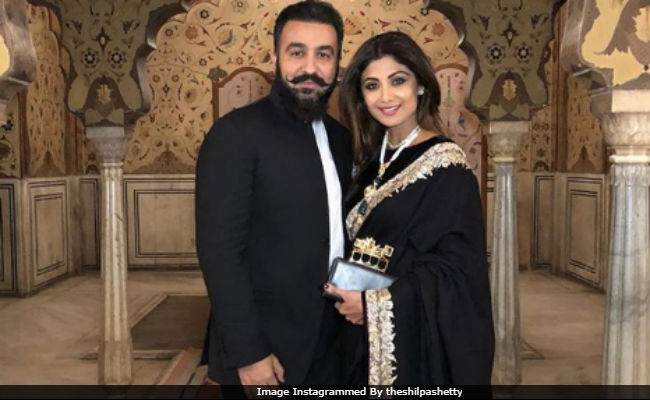 New Delhi: Actress Shilpa Shetty's pictures from her friend's 50th birthday party in Jaipur are currently trending. (We aren't surprised). Shilpa stuns in a black custom-made pashmina velvet sari by Manish Malhotra and Raj complements her in a black suit. "My Knight in shining armour @rajkundra9 ,Thank you for making me feel like a queen," Shilpa captioned a picture of them on Instagram. (In this freezing winter, Shilpa's black sari is a must-have in your wardrobe). She accentuated her look with a beautiful pearl set. Her Jaipur diary looks awesome and the pictures define royalty. Shilpa, Raj and their son Viaan reached Jaipur on Saturday.

My Knight in shining armour @rajkundra9 ,Thankyou for making me feel like a queen #hubbylove #happiness #gratitude #blessed #mine #soulmates

You make me feel like a King! Sitting in the city palace #Jaipur with my Maha Rani #jaipur @theshilpashetty #love #friendship

Friends 50th birthday in Jaipur and flight delayed 2 hours #airindia Today's breakfast porridge made in hot water with some Almond milk followed by eggs, avocado & sour dough toast. Swipe across and see my weight after 3 days started at 97.3 kgs am now just under 3 kg's lighter in 3 days! Holiday weight comes off fast if you don't delay! Thank you @theshilpashetty for the diet plan and regime! #newme #swastrahomastraho

The Kundras spent New Year in Dubai and opted for a home-stay there. Their pool-side picture received became viral in just no time. "Holidays are all about chilling by the heated pool," Shilpa captioned a post.

Seen these pictures from Shilpa and Raj's Dubai diaries yet?

Shilpa Shetty and Raj Kundra have been married for over eight years now. Viaan, 5, is the couple's only child. The couple celebrated their anniversary in November and Shilpa wished her husband with an adorable post.

Promoted
Listen to the latest songs, only on JioSaavn.com
"I loved you then, I love you still.. I love you now and always will. Happy Anniversary @rajkundra9, my family maker, superman, sunshine, soulmate, bestfriend and anchor..... 8yrs Down, FOREVER to go. 22.11.2017," she wrote.

I loved you then, I love you still.. I love you now and always will. Happy Anniversary @rajkundra9 ,my family maker, superman,sunshine,soulmate,bestfriend and anchor..... 8yrs Down, FOREVER to go. 22.11.2017#hubbylove #happyanniversary #8yrs #love #gratitude #blessed#loveuinfinity

Shilpa Shetty is the star of films such as Baazigar, Dhadkan, Life In A... Metro and Apne. She is also a yoga expert and also released a range of yoga fitness videos. In 2014, Shilpa produced her first film Dishkiyaoon. She has co-judged dance reality shows like Super Dancerand Jhalak Dikhhla Jaa.