Shershaah is based on the life of Captain Vikram Batra, who died in the Kargil war and received the Param Vir Chakra posthumously 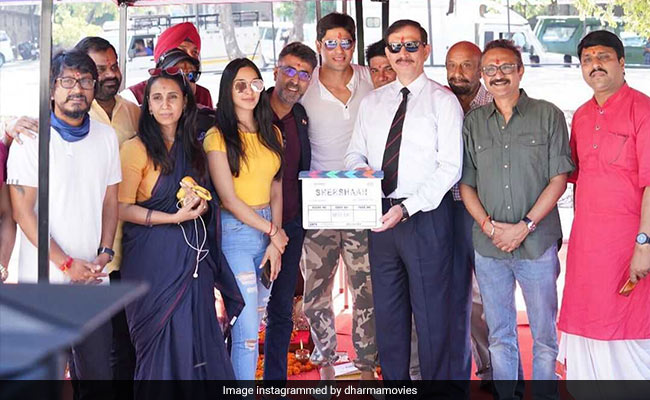 On the sets of Shershaah. (Image courtesy: dharmamovies)

Shershaah went on floors on Tuesday morning and the film occupied a spot on the list of trends after pictures from the film's sets were shared on social media. Dharma Productions, which has produced the film, shared pictures from the sets on social media. The photographs featured film's lead pair Sidharth Malhotra and Kiara Advani along with some guests. "The first day of shoot forShershaah in the presence of Lt. Gen Y K Joshi (then Lt. Col) and Commanding Officer of 13 JAK Rifles during Kargil War 1999 and Vishal Batra, brother of Vikram Batra," read the caption on the post. The film will be based on the life of Captain Vikram Batra, who died in the Kargil war and received the Param Vir Chakra posthumously.

Last week, Sidharth and Kiara announced their association with the project on social media. The actor who will play the lead role in the film, tweeted: "Excited to play Vikram Batra, a real-life hero on screen! Titled Shershaah! Shooting begins soon." Take a look at the tweet here:

In an interview with news agency IANS earlier this year, film's lead actor Sidharth Malhotra described his character in the film as a "huge responsibility" and added that it is the "toughest role of his life." He told IANS: "I will do the biopic on Vikram Batra. It is the toughest role of my life." The 34-year-old actor added, "I feel it is an emotional responsibility to play that character because the family of Vikram Batra felt that I can play his role so, it is a big responsibility to present their story on the big screen."