"So what exactly is a 'nothing to hide' award?" asked Twitter 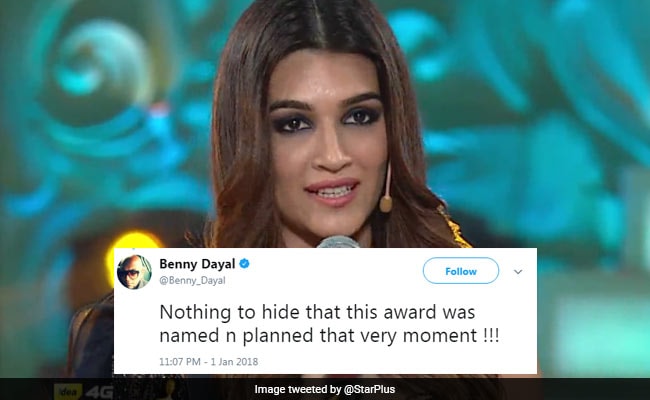 New Delhi: The recently held Star Screen Awards got Kriti Sanon and Shahid Kapoor trending on the New Year. Aired on Star Plus on New Year's Eve, the award ceremony witnessed Shahid and Kriti win in a newly introduced category - the two stars were 'honoured' with the 'Nothing To Hide' awards and, well, umm, Twitter has loads to say on the matter. It's well known that Twitter is very hard to please and in this case, Twitter found the category to be rather hilarious and forced. Singer Benny Dayal was also one of those who found the Star Screen Awards category lol-worthy: "Nothing to hide that this award was named and planned that very moment," he tweeted.

"So what exactly is a 'nothing to hide' award?" wrote a user while another one asked for assistance to have the category explained. Shahid Kapoor was not present at the awards gala but joined the audience with his acceptance speech via video call. Kriti Sanon, who received the award in person, thanked her fans for her popularity. "Many congratulations to Kriti Sanon for this achievement, now please tell the audience what does it even mean," tweeted a netizen soon after.

"Congratulations Kriti Sanon and Shahid Kapoor on winning the nothing to hide award," tweeted Star Plus and then this happened.

Congratulations @kritisanon and @shahidkapoor on winning the nothing to hide award.#StarScreenAwardspic.twitter.com/yD4BV1RVwQ

Nothing to hide that this award was named n planned that very moment !!!

So what exactly is a "Nothing to hide" award? pic.twitter.com/mUFAfqh0X7

whats the nothing to hide award please help

Interested to know what their speeches were. What the efff does the 'nothing to hide' award mean exactly?

Many congratulations to @kritisanon for this achievement, now please tell the audience what does it even mean. pic.twitter.com/gav84l95jC

Promoted
Listen to the latest songs, only on JioSaavn.com
The 'Nothing To Hide' category at Star Screen Awards was apparently introduced for celebrities who share glimpses of their personal life on social media. Shahid Kapoor, who is known for regularly updating his Instagram, has some 12 million followers on the photo-sharing site while Kriti Sanon records 9.4 million followers.

Kriti Sanon was last seen in Bareilly Ki Barfi while Shahid's next release is Padmavat, which has just been cleared by the Censor Board and is awaiting a release date.