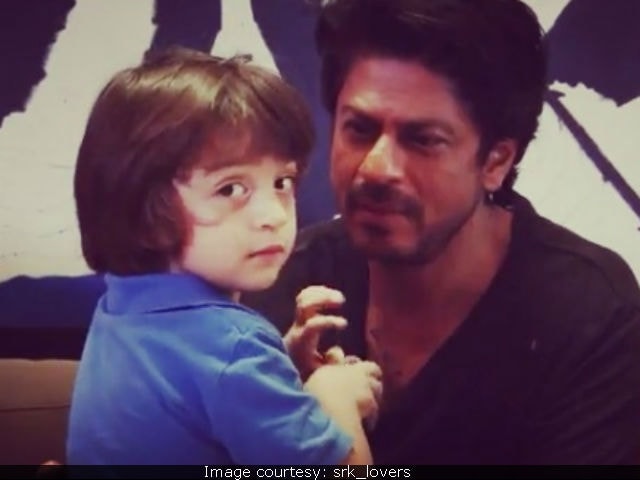 New Delhi: A video of superstar Shah Rukh Khan's tiny son AbRam crashing his interview is currently delighting the Internet. AbRam, a few months away from his fourth birthday and the youngest of the actor's three children, is pretty much his father's constant companion and often accompanies SRK on shoots and trips and to cricket matches. In the video that's swiftly going viral, little AbRam interrupts an interview that SRK, 51, is in the middle of to show him an injured thumb. "Papa, my thumb has broken," AbRam tells his dad, happily oblivious of the camera. "Come here," says Shah Rukh Khan, in full daddy mode. He kisses AbRam's thumb and asks, "Is it okay now?" Later, the crew filming the interview asks AbRam to say bye to SRK's fans and audience.

We got to witness some very adorable moments between the doting dad SRK & little AbRam Khan during FB live chat with @TheViralFever! pic.twitter.com/BxB3LRQ3FR

In a recent interview to news agency PTI, Shah Rukh Khan said that AbRam wanted to be in pictures with him when they were returning from a trip to Dubai. "I was at the airport, had to get back from Dubai and there were lots of people taking pictures with me. So, I said let me stand here, finish the pictures and board the plane and he wanted to be part of every picture. Halfway through, my bodyguard just took him away but he got so disturbed. He said 'You're not allowing me to take pictures,'" SRK said.

Promoted
Listen to the latest songs, only on JioSaavn.com
The fond papa also confessed to NDTV on the train ride he took from Mumbai to Delhi last week that he was missing his son. "I wish I had brought AbRam along with me, he loves to travel. And he knows the whole team, he would have been comfortable," said SRK. AbRam Khan was born in May 2013, the third of Shah Rukh and Gauri Khan's children after Aryan, 19, and Suhana, 16.

Shah Rukh Khan's Raees released on January 25 and has so far made over Rs 93 crore. The film also stars Pakistani actress Mahira Khan and Nawazuddin Siddiqui.