Shah Rukh Khan said, "AbRam is not yet playing cricket, he is playing a bit of football" 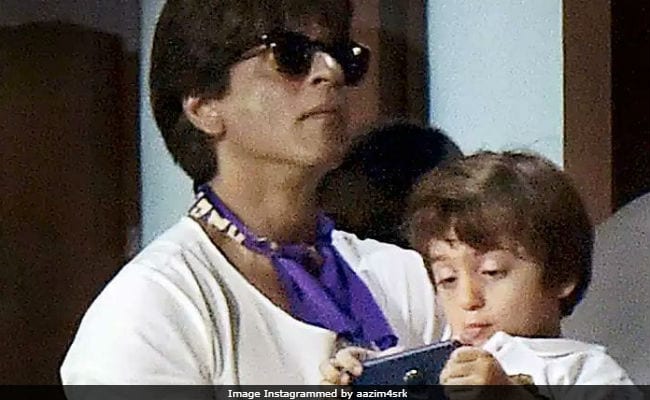 New Delhi: Superstar Shah Rukh Khan wants his son AbRam to grow up to be a hockey player and represent India one day, reported news agency IANS. Speaking at the sidelines of Indian Premier League match at Eden Garden on Sunday, Shah Rukh Khan told Sadhna News that the five-year-old has shown interest towards the game of football, reported IANS. Speaking about AbRam's interest in sports, he said, "He is not yet playing cricket, he is playing a bit of football. I would like him to play field hockey for India," IANS quoted Shah Rukh Khan as saying. Remember Shah Rukh Khan in 2007 film Chak De! India? The 52-year-old had essayed the role of a hockey coach to Indian women's national team.

On Sunday night, AbRam and Suhana were photographed at the Eden Gardens, where the first match of the season was played between Kolkata Knight Riders and Royal Challengers Bangalore. The family witnessed KKR's four-wicket win against RCB.

Here are pictures of Suhana and Abram with Shah Rukh and the others at Eden Gardens, where the match was played.

Shah Rukh Khan's children Aryan, Suhana and AbRam have often accompanied their father to the IPL matches. In fact, AbRam was just two-year-old, when he made his official debut at the IPL matches in 2015.

At the time, Shah Rukh Khan had tweeted, "Taking so many kids for the KKR match....it's like I am a class teacher in-charge of nursery to higher secondary..."

Taking so many kids for the KKR match....it's like I am a class teacher Incharge of Nursery to Higher Secondary...

Apart from IPL matches, Shah Rukh Khan has been keeping busy with his upcoming film Zero, which also stars Katrina Kaif and Anushka Sharma. On being asked, if he would give KKR's matches a miss due to his other work commitment, he told IANS, "No, no, I'm not going back... I will keep coming to support KKR."

Promoted
Listen to the latest songs, only on JioSaavn.com
The Aanand L Rai-directed film Zero is slated to release to December 21.