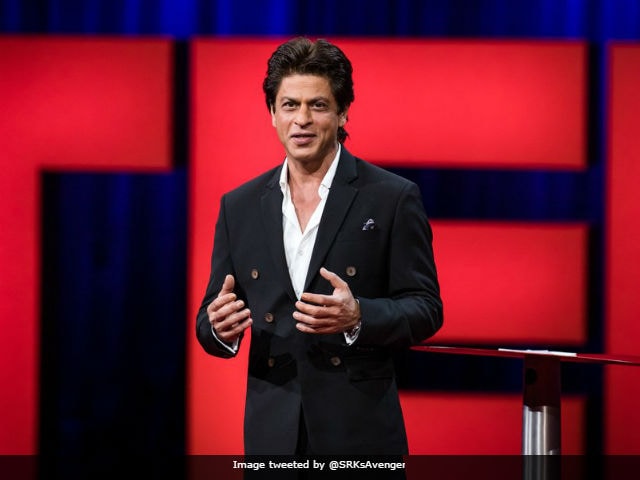 New Delhi: Shah Rukh Khan delivered an inspiring speech at the TED Talks 2017 in Vancouver on Thursday, the first Indian actor to do so. SRK, 51, about being referred to as the 'King of Romance' and how he has been 'grappling to be a part of the changing world, after the introduction of the internet'. Shah Rukh Khan said, "I sell dreams and I peddle love to millions of people back home in India, who assume that I am the best lover in the world," reports AFP. The official Twitter handle of TED Talks quoted the 51-year-old actor as saying, "Humanity is a lot like me. It's an ageing movie star, grappling with all the newness, wondering whether she got it right."

"We had expected an expansion of ideas and dreams; we had not bargained for the enclosure of judgement," Shah Rukh Khan said about being trolled on social media.

SRK also joked about how the word 'apple' still makes him think of the fruit and not the tech giant founded by Steve Jobs.

"For years, I've been a huge fan of TED Talks. There are so many people in India who would like to come out with their ideas and thoughts, and speak them in Hindi." Shah Rukh Khan, who will curate the series here in India, said, reports AFP.

The impact of having a superstar was evident before and after Shah Rukh Khan's speech - fans staked out the Vancouver convention centre where SRK was speaking, some of them pressing against windows to watch the live stream on TV screens, reports AFP. Soon after his speech ended, SRK started trending on Twitter with the hashtag #SRKLiveAtTEDTalks.

Here are some of the glimpses of the actor at the Ted Talks 2017.

King Khan's entry at #TED2017 received with a huge applause from the audience! #SRKLiveAtTEDTalkspic.twitter.com/sRv2FzBkwE

Earlier, TED Talks Curator Special Projects Juliet Blake shared in a tweet that Shah Rukh Khan would be speaking. He replied saying he hoped he would remember what he had to say (small matter for an actor who had to memorise lines of dialogue, we say).

Looking forward to it and I hope I remember my speech!!! https://t.co/NDpdTWZVeQ

Shah Rukh Khan also thanked TED Talks for the 'wonderful' time he had.

Thank u @TEDTalks@TEDchris@julietrblake for a wonderful time. All who came to lov me in Vancouver…my lov 2 u. pic.twitter.com/FJD3yWgxsQ

Promoted
Listen to the latest songs, only on JioSaavn.com
TED Talks India: Nayi Soch, to be hosted by SRK, will be broadcast on Star Plus.

Shah Rukh Khan was last seen in Raees earlier this year. He has a film with Anushka Sharma coming up, and is working on one in which he plays a dwarf.