Shah Rukh Khan On A Possible Film With Kangana Ranaut: It'll Be Wonderful

Shah Rukh Khan says that Mr Bhansali has discussed two projects with him, one of which may also feature Kangana Ranaut 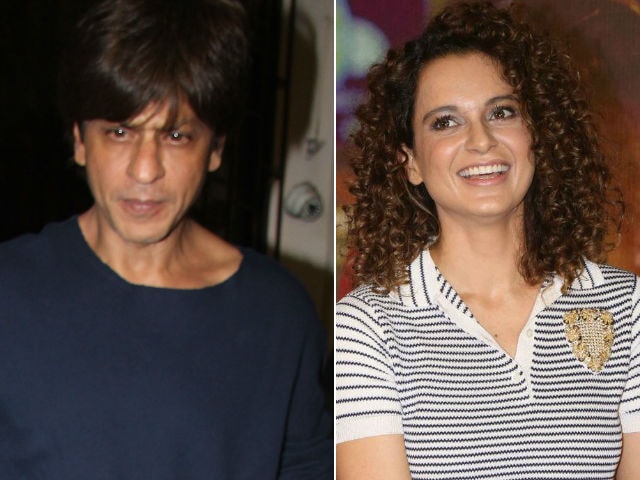 New Delhi: Shah Rukh Khan, who was last seen in box office debacle Jab Harry Met Sejal, is currently busy filming Aanand L Rai's untitled project, in which he plays the role of a dwarf. The actor has plenty offers from directors like Sanjay Leela Bhansali but nothing has been finalised yet. The 51-year-old actor told DNA what's kept him from signing his next after Aanand L Rai's film. Sanjay Leela Bhansali, who directed SRK in 2002 film Devdas, has approached him for two projects but "there are date issues, his starting issue so inshallah, we will do something," DNA quoted SRK as saying.

There have been reports that Mr Bhansali plans to cast Kangana Ranaut and Shah Rukh Khan in a period piece and SRK said: "There is a discussion of that film too. It is a period setting, but I don't really sit down and ask, who the other cast members are. It would be wonderful if she's there, but we haven't honed on it yet. We have chatted about it, talked about it and we still haven't sat down and said we're starting this one."

Though Shah Rukh said it would be "wonderful" to have Kangana onboard, the Queen actress famously said she is not interested in co-starring with any one from the Bollywood Khan trinity (Shah Rukh, Salman and Aamir) when she appeared on television show Koffee With Karan 5 in February this year. "I don't want to work with anyone where I don't have equal (roles)," she had said.

Apart from Mr Bhansali, Shah Rukh has discussed a film idea with Aditya Chopra, who directed the actor in three out the four films he made - Dilwale Dulhania Le Jayenge (1995), Mohabbatein (2000) and Rab Ne Bana Di Jodi (2008). His last film Befikre featured Ranveer Singh in lead role. "We were talking about it when he went on to do Befikre. Of course, it was nascent and he just had an idea. With Adi and all, I just need to know the idea. But he has not called back with it. If he's still excited to work on it, he will call me for sure," Shah Rukh told DNA.

Promoted
Listen to the latest songs, only on JioSaavn.com
For the next five to six months, Shah Rukh has assigned dates to Aanand L Rai's film, co-starring Anushka Sharma and Katrina Kaif. "I will have some time free after that, so yes, I will do a film then. But I haven't signed anything yet," said Shah Rukh.

Which director do you want SRK to collaborate with first - Sanjay Leela Bhansali or Aditya Chopra? Tell us in comments.