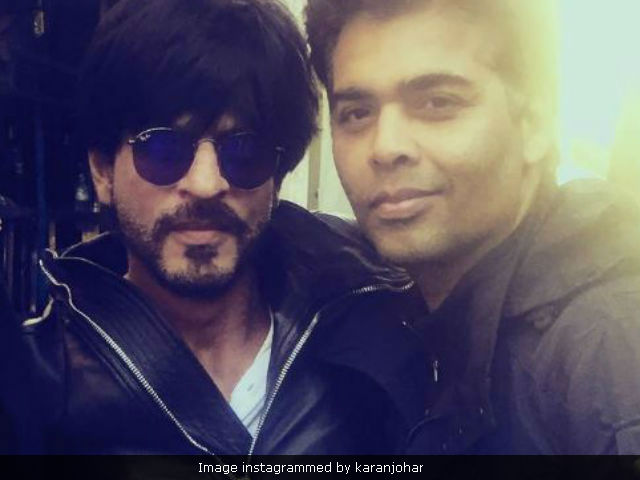 KJo and Shah Rukh have made four films together. (Image courtesy: karanjohar

New Delhi: Shah Rukh Khan's latest film Raees hit the screens on Wednesday and his filmmaker friend Karan Johar tweeted to congratulate him and the team. What could have ended on a simple thank you note, extended to an absolutely hilarious conversation between the two in which Aamir Khan's Dangal and KJo's last film Ae Dil Hai Mushkil were invoked. Shah Rukh Khan's film, directed by Rahul Dholaika, opened to favorable reviews on January 25 and has collected over Rs 20 crore in the first day, reported trade analyst Taran Adarsh. "Raees will witness humongous biz again (sic)," he wrote in a tweet.

But this story is about Shah Rukh and Karan's conversation. So here it is:

Now u should also make an intense action film. U have it in u. Dishoom Dishoom Hota Hai. https://t.co/KbJbdgycQS

I have always directed ur action scenes. Every scene where I run furiously after the ladies and hold their hand!! https://t.co/T6vgITRlFw

Haha!! That's true and it's time to tell everyone you directed the basketball scenes in kuch kuch as well!!! https://t.co/jbce9tFdAT

Your widening my genre choices Bhai!!! You know versatility is not my strength!!!! https://t.co/39Cn2TWQZI

Now now don't be modest. U r so versatile your last three films'name didn't start with a 'K' https://t.co/bCEIUQxWJP

Promoted
Listen to the latest songs, only on JioSaavn.com
Meanwhile, Shah Rukh's Raees is giving stiff competition to Hrithik Roshan's Kaabil which opened on the same day. Kaabil collected significantly less than Raees. Taran Adarsh reported the film made Rs 10.43 crore on Day 1.

After Raees, Shah Rukh will get busy filming Aanand L Rai's project in which he plays a dwarf. His next release is Imtiaz Ali-directed Rahnuma with Anushka Sharma. The film releases on August 11.