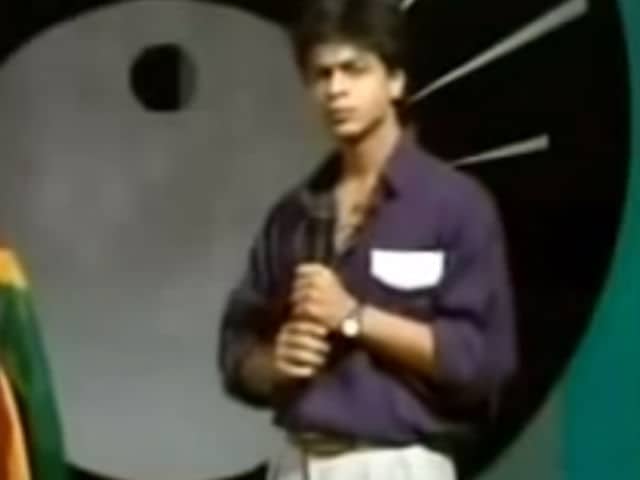 Shah Rukh Khan in a still from the video. (Image Courtesy: YouTube)

New Delhi: It's throwback Thursday and we have a special treat for you. A video from superstar Shah Rukh Khan's early television career has emerged on YouTube and is currently going viral. It shows a very young SRK anchoring a musical show on Doordarshan, either in the late Eighties or early Nineties, and introducing guest Kumar Sanu who sings an unreleased number.

It's as wonderful as it sounds.

SRK is one of two hosts on the show - which neither we or the Internet has managed to identify yet - and the script has him ask if Kumar Sanu is the one who sings in a style similar to Kishore Kumar.

Doordarshan-era Shah Rukh Khan made his debut with the television series Fauji in 1989 although his first role was in Lekh Tandon's Dil Dariya, which began filming in 1988 but was delayed. He also starred in Aziz Mirza's television series Circus and Mani Kaul's miniseries Idiot in 1991.

In 1992, he made his debut in Bollywood with Deewana, co-starring Divya Bharti and Rishi Kapoor. SRK is the star of films like Chamatkar, Raju Ban Gaya Gentleman, Pardes, Baazigar, Dilwale Dulhaniya Le Jaayenge, Kuch Kuch Hota Hai, My Name is Khan and Dilwale.

Shah Rukh Khan, who was last seen in Fan in April, is gearing up for the release of Raees on January 26, 2017.