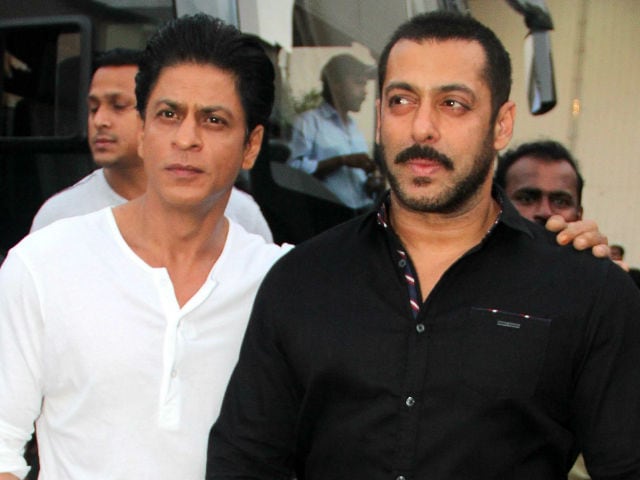 Shah Rukh and Salman Khan photographed at a studio in Mumbai.

New Delhi: Yes, this is happening.

Actor Shah Rukh Khan is reportedly all set to promote his upcoming film Dilwale on the sets of Salman Khan's popular television show Bigg Boss, which is currently in its ninth season.

Shah Rukh, dressed in a white tee and denims, was spotted at a studio in Mumbai with his Karan Arjun co-star Salman, who was dressed in a black shirt and jeans.

Shah Rukh's Dilwale also stars Kajol, Varun Dhawan and Kriti Sanon. The Rohit Shetty-directed film will release later this month. Now, Varun and Kriti recently visited the sets of Bigg Boss, soon after the release of their song Manma Emotion, there's no word yet if Kajol will drop in this time or not.

Varun had tweeted glimpses from the show:

Recently, Shah Rukh and Salman also made headlines when they shared a Sultan-style hug on the former's 50th birthday.

Meanwhile, Shah Rukh and Salman's upcoming projects - Raees and Sultan, respectively - are all set to clash at the box office next year on Eid. Raees, directed by Rahul Dholakia, is produced by Farhan Akhtar's Excel Entertainment, while Sultan is backed by Yash Raj Films and directed by Ali Abbas Zafar. (Also Read: Farhan to Release Raees on Eid, Says 'Salman Will Decide About Sultan')