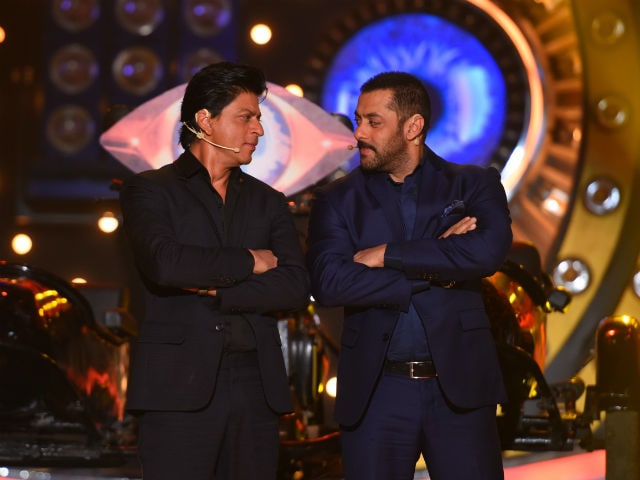 Shah Rukh and Salman photographed on the sets of Bigg Boss 9.

Salman exhibited his usual nonchalance while a more subdued Shah Rukh matched his friend's energy with his wit and impeccable sense of humour.

Shah Rukh, Salman and Aamir Khan form Bollywood's Khan trio. Their professional rivalry has always made news. Taking a jibe at this, Shah Rukh said to Salman, "While we were busy fighting, Aamir Khan paced ahead of us and left us behind. We kept fighting among ourselves and he went ahead."

Shah Rukh also said that Salman is a good host of Bigg Boss. "Bigg Boss has got a zabardast and permanent host in Salman, "said Shah Rukh.

When a fan asked them how much they missed each other during their fight, Shah Rukh said, "We knew there would be no issue. Our families knew that no one could bring us together. Only we could decide about our patch up." (Also Read: Shah Rukh, Salman Khan's 'Bigg Dilwale' Night. Here Are Highlights)

"Neither did I speak badly about Shah Rukh nor did he do so about me. We never separated," added Salman.