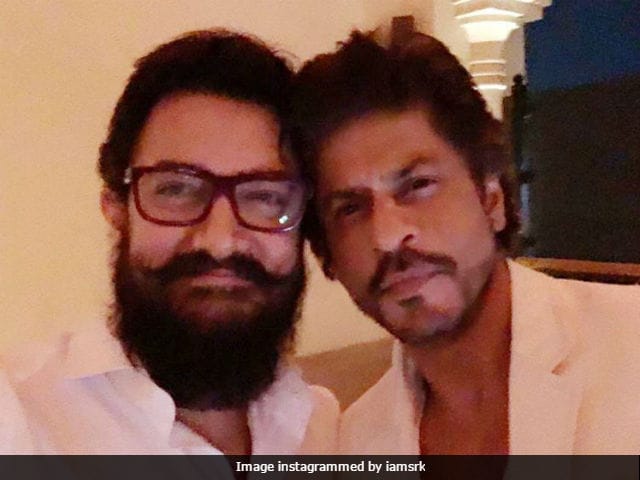 New Delhi: A month after sharing a selfie with Aamir Khan, Shah Rukh Khan shared another picture on social media along with the Taare Zameen Par actor. This time the duo was accompanied by the Netflix CEO Reed Hastings and his team. The image posted by the 51-year-old actor on Holi was captioned: "Netflixed & Chilled. Thx #ReedHastings, #TedSarandos & team & my friend #AamirKhan for breaking his regimen for me(sic)." Shah Rukh Khan, who recently underwent a minor shoulder surgery, was seen with his arm in a sling. As per news agency PTI reports, the Dilwale actor's production house Red Chillies Entertainment has signed a long-term deal with Netflix. Shah Rukh Khan's movies will now be streamed by Netflix to its 86 million plus viewers globally.

Check out the photograph shared by Shah Rukh Khan here:

The official website of Netflix also posted a picture with the stars on social media, captioned: "Saturday night got pretty Khantastic!"

Earlier, in a statement to PTI, Shah Rukh Khan said: "Red Chillies is surging ahead in global entertainment and for the first time, our great stories are going global on Netflix all at once and crossing all geographical barriers, waiting to be discovered over the world. No more waiting for our fans wherever they are."

Ted Sarandos, Netflix's Chief Content Officer, told PTI: "Shah Rukh Khan is the most sought-after actor in the Indian film industry, and has played a huge role in bringing Indian cinema to the world stage. His moniker 'King Khan' speaks to his status as a cultural icon and to the incredible popularity of his films among audiences worldwide."

Meanwhile, Aamir and Shah Rukh Khan are reportedly also teaming up for a television commercial. The duo will be a part of Star Plus' Nayi Soch campaign, according to dnaindia report.

Promoted
Listen to the latest songs, only on JioSaavn.com
On the work front, Shah Rukh Khan, who was last seen in Rahul Dholakia's Raees, is currently shooting for Imtiaz Ali's next project opposite Anushka Sharma. The Baazigar actor will also feature in Aanand L Rai's next venture in which his character is a dwarf.

Aamir Khan, who was last featured in the 2016 movie Dangal, will next be seen in Advait Chandan's Secret Superstar and Thugs Of Hindostan.