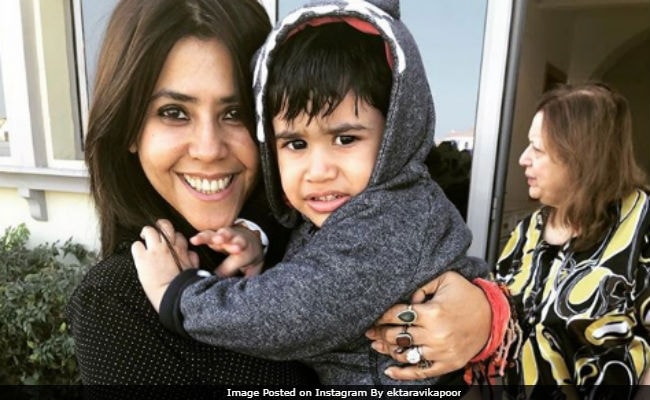 New Delhi: Producer Ekta Kapoor shared an extremely cute picture with her nephew Laksshya (Tusshar Kapoor's son). For all the buas out there, Ekta has a tip. Here it is - "When your nephew wants to jump out of your hands, you clutch him tighter and smile," she wrote. In the picture, Laksshya, a little over one, is perched in Ekta's arms but sports a bewildered expression. The Kapoors flew to Dubai over a week ago, where they celebrated Shobha Kapoor's birthday. Ekta and Tusshar are children on actor Jeetendra and Shobha Kapoor. Ekta is a well-known producer while Tusshar is an actor. He became a single parent via IVF in June 2016.

When u force ur nephew into a pic #majormissing

Several months ago, Tusshar Kapoor told IANS that he plans to make Laksshya used to travelling. "He is okay when I am leaving. He doesn't have too much separation anxiety. From the time the movie (Golmaal Again) started, I would have him on sets. He knows the time when I am going. I spend my time with him in the morning. When I say goodbye, he understands. I have to make him used to travelling more and more. He has to be flexible to changes in schedules and plans," Tusshar said.

Promoted
Listen to the latest songs, only on JioSaavn.com
Laksshya and Taimur (Kareena Kapoor and Saif Ali Khan's son) are often spotted together at various birthday parties. Kareena had also brought Taimur to Laksshya's first birthday party in Mumbai.