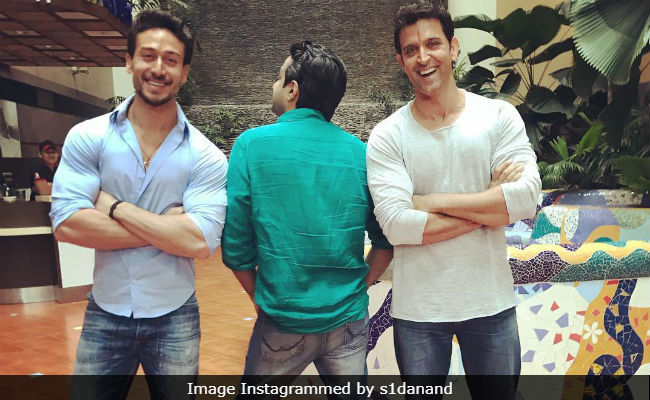 Seems like filmmaker Siddharth Anand is "dying to shoot" the Hindi remake of Rambo, at least that is what the caption on his Instagram post says. On Friday, the filmmaker made his Instagram debut and he couldn't have done it in a cooler way. Interestingly, Siddharth's first Instagram post featured Tiger Shroff and Hrithik Roshan, who can be seen posing for the camera. Siddharth accompanied the post along with the hashtag "#HrithikvsTiger" and wrote: "Looking ahead. Behind no more! And it begins!! #HrithikvsTiger Dying to shoot, what say?" A few minutes after Siddharth posted the picture, Tiger also shared it in his Instagram account and wrote: "Welcome to Instagram Siddharth. This one's going to be one to remembered guys. Promise!" Needless to say, the picture garnered lots of love from fans and over 4 lakh likes on Instagram.

Looking ahead. Behind no more! And it begins!! #HrithikvsTiger #dyingtoshoot what say @hrithikroshan @tigerjackieshroff @yrf

The trio have collaborated for the Hindi remake of Sylvestor Stallone's popular Rambo series, in which Tiger Shroff will be seen playing the titular role while details about Hrithik's character have been kept under wraps. However, we got a fair idea about Hrithik and Tiger's equation in the film through a Twitter conversation that the duo had last year, in which Tiger addressed Hrithik as his "guru" and Hrithik referred to Tiger as his "student."

This is what we are talking about.

A Guru will always have that one trick, he doesnt teach his student. @iTIGERSHROFF#HrithikVsTiger

Sir @iHrithik. You are my Guru. But you should know when the game changes. #HrithikVsTiger

Tiger, who is trained in martial arts and has been a part of several high-octane action films such as Heropanti and Baaghi 2, in an interview with news agency IANS last year said that he "feels surreal" to be a part of the film and told IANS: "Being a martial artist and a huge action movie buff since childhood, this all seems very surreal, and I'm very grateful for this opportunity. By no means do I believe I can replace the legendary Sylvester Stallone; however, I do feel that somehow this is something I've been preparing for since childhood."

The film will also features Befikre actress Vaani Kapoor and it is being produced by Yash Raj Films. The film is slated to release on January 25, next year.