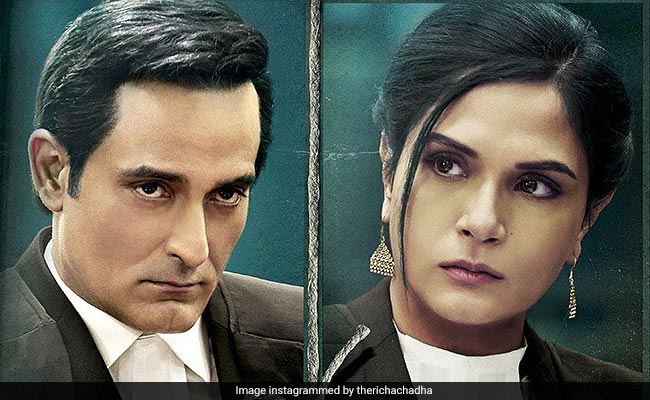 The trailer of Section 375 hit the Internet on Tuesday and it is extremely gripping. The courtroom drama, which features Richa Chadha and Akshaye Khanna in the lead roles, touches upon Section 375 of the Indian Penal Code. The Ajay Bahl-directed film is inspired by real life incidents. Actress Meera Chopra plays the fictional character of Anjali Vasudev Dangle, who is a junior costume assistant in the film industry. The two-and-a-half minute trailer begins with Meera recounting the details of a sexual assault case, in which she accuses film director Rohan Ravi Khurana (played by Rahul Bhat), also a fictional character. Anjali finds herself on the receiving end of some harsh questions pertaining to the assault. In the latter part of the video, we see Richa Chadha and Akshaye Khanna representing Anjali and film director Rohan Ravi Khurana's cases in the court, respectively.

Richa Chadha's impressive portrayal of a righteous lawyer and Akshaye Khanna's intense persona will keep the viewers glued throughout the course of the trailer. The crisp dialogues deserve a special mention. Sandha Mridul also makes a blink-and-miss appearance in the trailer.

Check out the trailer of Section 375 here:

Sharing the film's trailer on her Instagram profile on Tuesday, Richa Chadha wrote: "Every story has three sides. His story, her story and the truth. Verdict out on September 13 (that's when the film will release).Section 375 trailer out now on."

Section 375 has been directed by Ajay Bahl and it has collaboratively been produced by Kumar Mangat Pathak, Abhishek Pathak and SCIPL. The film is slated to release on September 13 this year.