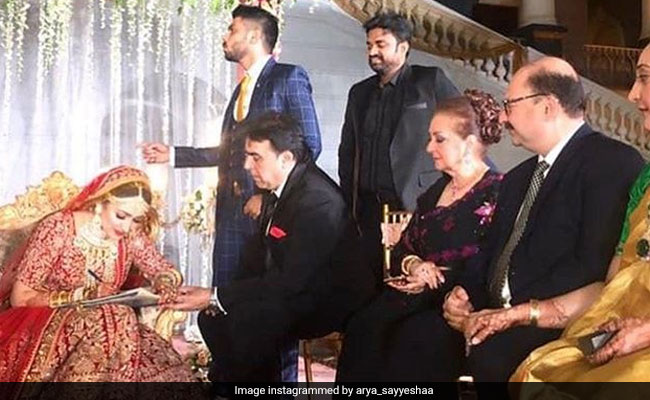 Sayyeshaa Saigal photographed at her wedding with her family. (Image courtesy: Instagram)

Actress Sayyeshaa Saigal, grandniece of Saira Banu and Dilip Kumar, married actor Arya as per Muslim traditions in Hyderabad on Sunday. Sayyeshaa, dressed in bridal red, was photographed on the stage with her family including Saira Banu, who looked graceful in a black saree. Sayyeshaa's wedding ceremony was preceded by a sangeet ceremony and a pre-wedding bash in Hyderabad's Taj Falaknuma Palace. Over the weekend, a picture of Saira Banu dancing with her niece Shaheen Banu (mother of the bride) during the sangeet ceremony went crazy viral. Sayyeshaa Saigal, is best-known for her role in Ajay Devgn's Shivaay, met Arya when they were filming 2018 film Ghajinikanth.

Here are pictures from their wedding ceremony held on Sunday: