"Camp fire for lights, as long as you can deal with heights," wrote the actress 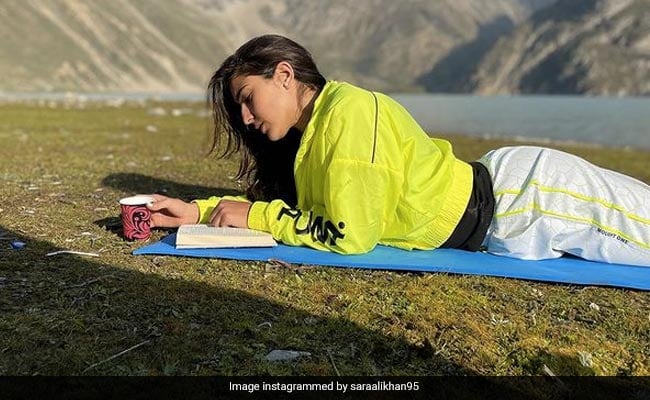 Sara Ali Khan, on Sunday, treated her fans to some amazing pictures from her trip to Kashmir. The actress, who went camping with her friends at the Sheshnag Lake, situated near Pahalgam, posted photos and videos of the "sunny rays and starry nights" that she witnessed there. In one of the clips, Sara can be seen making a splash in the lake while in another photo, she can be seen eating camp food with her friends. "Sunny rays and starry nights, moonlight and camp fire for lights, as long as you can deal with heights and over food are the only fights," the actress wrote in her usual poetic way and added: "PS - sorry for eating all the food" for her friends. Sara also added the hashtags #highaltitude and #lake.

Sara Ali Khan was in the Maldives few days ago. See pictures of the actress from the beach destination here:

Sara Ali Khan has Atrangi Re with Akshay Kumar and Dhanush lined up. The film is being directed by Aanand L Rai.

She was last seen in Coolie No 1, in which she co-starred with Varun Dhawan. The film failed to impress critics, as well as cine-lovers. In his review for NDTV, film critic Saibal Chatterjee gave Coolie No 1 one star out of five and wrote: "It definitely has more colour and slickness, but all its gloss is strictly superficial. The new version is flashier and louder. The hope clearly is to paper over - and drown out - the sheer pointlessness of the exercise. But no matter what the director and his son, lead actor Varun Dhawan, try, this coolie is anything but numero uno. The 2020 Coolie No 1, released on Amazon Prime Video, is no patch on the 1995 Coolie No 1."