Dressed in a white kurta and sharara, Sara dances away to glory and is as adorable in the video as she is in the final cut of the song. 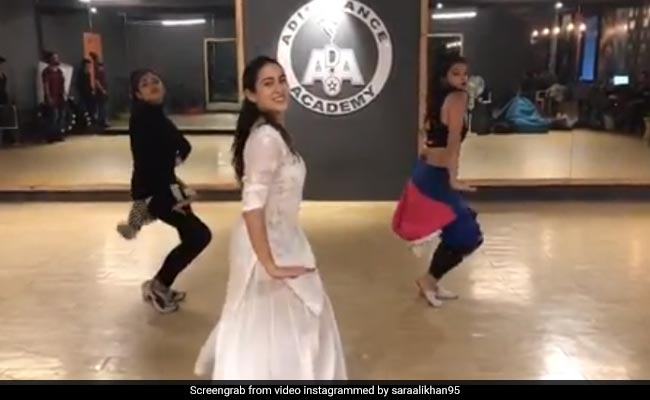 Sara Ali Khan is so cute. The 24-year-old actress Instagrammed a behind-the-scenes video from when she rehearsed for her "pehla gaana" and it's a must watch. Sara Ali Khan, who stepped into Bollywood with her December 2018 release Kedarnath, dug out an old video of hers dancing to Sweetheart from the movie and shared it with her Instafam. "Hamara pehla gaana," she captioned the video, in which she can be seen perfecting the signature Sweetheart steps at a dance studio. Dressed in a white kurta and sharara, Sara dances away to glory and is as adorable in the BTS video as she is in the final cut of the song.

Watch Sara being an absolute Sweetheart in this video:

Sara Ali Khan co-starred with Sushant Singh Rajput in Kedarnath, a touching love story of a young Hindu woman and Muslim porter set against the backdrop of the devastating Kedarnath floods of 2013. Directed by Abhishek Kapoor, Sara Ali Khan's performance in Kedarnath was well received by critics.

Even before Sara made her Bollywood debut, she wooed social media with her Bollywood-like dance moves at a star-studded wedding reception in April 2018. A viral video of Sara, stunning in a saree, dancing to Saat Samundar Paar had gone crazy viral. Take a look:

Sara Ali Khan is yet to complete her first-year anniversary in Bollywood but she is already two-films old and adding more to her line-up. On the work front, she is looking forward to the release of Imtiaz Ali-directed Love Aaj Kal 2, in which she co-stars with Kartik Aaryan. Sara is also currently shooting for the remake of Coolie No.1, in which she shares screen space with Varun Dhawan.