Sara Ali Khan Is "Sometimes Confused, Always Hungry" And Many Other Things 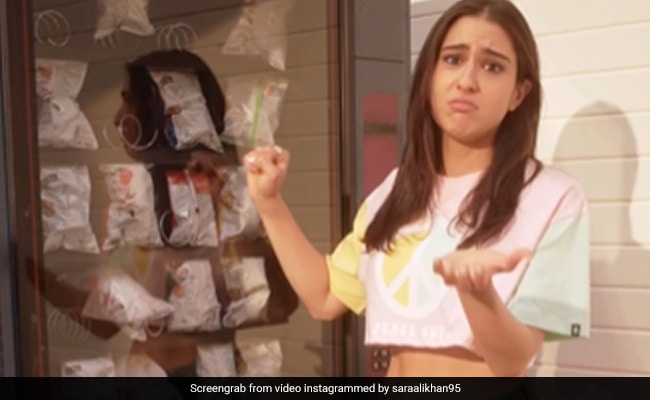 Sara Ali Khan is everyone's favourite thanks to her personality on-screen and off-screen. The actress loves to keep it real, raw and fun on social media and her fans love her for it. Sara's Instagram timeline is curated to give you a sneak peek into her authentic self and her latest video just reinforces this. In the new clip, Sara has used several words – in the form of background audio to describe herself.  They are: “night owl, sometimes confused, determined, always always hungry, always ready for some fun, energetic, always chilling.” Sara wrote in the caption, “When people ask me to describe myself.”

Recently, Sara Ali Khan revealed another facet of her personality. The actress showed in an Instagram post that she is a true blue water baby. In the image shared, Sara is on a cycle, dressed in a pink bikini and a white kimono, with the ocean in the background.  Sharing the image, Sara said, “Be shore of yourself. Come out of your shell. Take time to coast. Avoid pier pressure. Sea life's beauty. Don't get so tide down on work that you miss out on life's beautiful waves." The actress also added wave, sun, cycle and shell emojis in the caption.

Not too long ago, Sara Ali Khan also gave fans a glimpse of a star-studded party with a bunch of fun photos. Here, she is seen with Karan Johar, Ananya Panday, Janhvi Kapoor, and Varun Dhawan as well as her brother Ibrahim Ali Khan. Sharing the post, she said, “Happy Diwali. Love, light and prosperity to all.”

In terms of work, Sara Ali Khan will be seen in Laxman Utekar's untitled project alongside Vicky Kaushal. Her last release was Atrangi Re! with Dhanush and Akshay Kumar. The film was directed by Aanand L Rai. Sara, who is the daughter of actors Sara Ali Khan and Amrita Singh, made her debut in 2018 with Kedarnath.