Sanju: This Pic Of Ranbir Kapoor And Sanjay Dutt From Film Is Viral 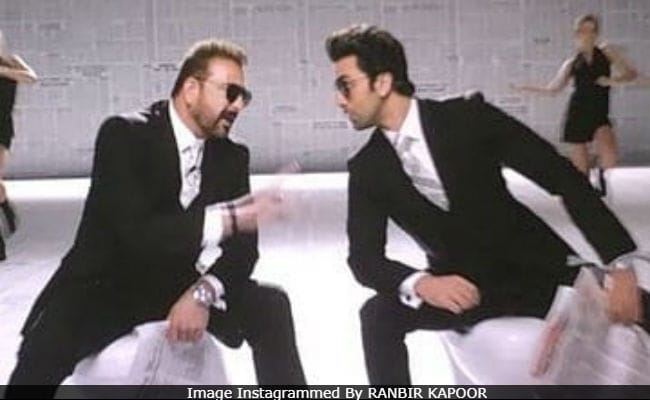 A picture of Ranbir Kapoor and Sanjay Dutt from Sanju's promotional song is doing the rounds on social media, a day before the much-awaited film releases. The picture has apparently leaked from the sets and is now being shared widely on social media. Ranbir and Sanjay Dutt had shot for the song a few days ago, which will be used in the end credits of Sanju. In the viral picture, the duo can be seen twinning in similar black suits. The untitled song is said to be a peppy dance number. Sanju, which is headlined by Ranbir Kapoor, is a biopic on Sanjay Dutt.

Of the special song, a source told Indian Express, "This film is a rollercoaster ride of emotions, love and friendship. And we wanted to make a fun song that depicts Sanjay Dutt's relationship with the media. This song will be part of the end credits. It will surely make the audiences' experience a complete journey of his life."

Instead of the song, the makers of Sanju had initially planned to have a video chat between both the actors but due their work commitments, it couldn't be initiated.

Sanju stars Paresh Rawal as Sunil Dutt, Manisha Koirala as Nargis, Sonam Kapoor as one of Sanjay Dutt's girlfriends, Dia Mirza as Maanyata, Anushka Sharma as a biographer and Vicky Kaushal as his childhood friend.

Promoted
Listen to the latest songs, only on JioSaavn.com
A screening of the film was hosted on Wednesday evening, which Sanjay Dutt, who earlier said that Ranbir Kapoor has done a 'fantastic job' in the film, also attended.