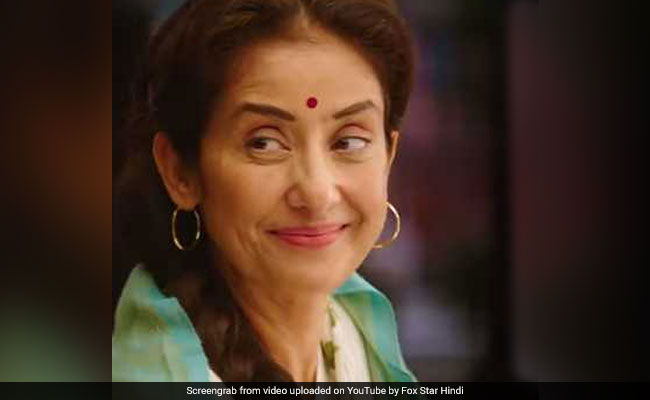 Manisha Koirala in a still from Sanju (Courtesy YouTube)

In Sanju, Manisha Koirala stars as Sanjay Dutt's onscreen mother, the legendary actress Nargis Dutt, who died battling cancer in 1981. After watching the Rajkumar Hirani-directed film, Sanjay Dutt told Manisha Koirala that her onscreen look bears an uncanny resemblance to his mother, a mid-day report stated. "Baba (Sanjay Dutt) was happy that I was part of the film. When he saw me in the look of Nargisji, he told me that I look a spitting image of his mother," Manisha Koirala told mid-day. The actress added that playing the character of Nargis Dutt was very "special" despite the fact that she had a special appearance in the film.

Manisha Koirala, about how she prepped for her role in Sanju, said: "My one-point research was Rajkumar Hirani [director] and I followed his diktat. Since the movie was not about Nargisji as an actor, I didn't watch her movies. I focused more on finding documentaries on her life." Sanju is a biopic based on the life of Sanjay Dutt. Ranbir Kapoor plays the protagonist and the film also stars Paresh Rawal, Sonam Kapoor, Anushka Sharma, Karishma Tanna and Vicky Kaushal in key roles.

Manisha had earlier explained how a lot of effort was put into recreating different looks to resemble Nargis in Sanju. Sharing a photo of herself dressed as Nargis Dutt, Manisha Koirala wrote: "Many different looks were tried on, through various photographs and books and documentaries... Here are few for you guys... Peep in to what goes on to create a look. Amongst other things we tried many hair styles."

During a recent interview, Manisha told news agency IANS: "For Sanju, I did a lot of research. I have tried to capture her essence, the core of her being. Just looking like her, or combing my hair the way she did, is not enough. I had to understand her spirit, her soul. Just how much I've succeeded, we will soon know."

Meanwhile, Manisha Koirala and Sanjay Dutt will be seen on the silver screen together after a span of 10 years in the Hindi remake of Telugu film Prasthaanam, which also stars Jackie Shroff. Sanjay Dutt is reviving his production firm after seven years with the Prasthaanam, which will be directed by Deva Katta, who had helmed the Telugu version as well. Sanjay Dutt and Manisha Koirala made their first on-screen collaboration with Feroz Khan's Yalgaar, which released in 1992. Since then, the actors have worked together in films like Sanam, Kartoos, Khauff and Baaghi.

Manisha Koirala was last seen in Netflix anthology Lust Stories. She featured in the segment directed by Dibakar Banerjee. She co-starred with Sanjay Kapoor and Jaideep Ahlawat in the short film.
Comments
sanjusanju manisha koirala