"To everyone who is with their families right now, cherish them," wrote Sanjay Dutt 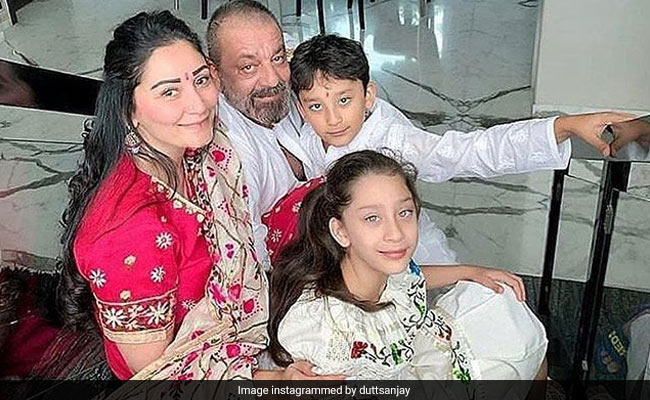 Sanjay Dutt is missing his family a lot. On Tuesday, Sanjay Dutt shared a picture featuring himself with wife Maanayata Dutt and kids Shahraan and Iqra on his Instagram profile. In the picture, they can be seen dressed in traditional attire as they pose for the family picture together. Sharing the picture of his wife and kids who are stranded in Dubai due to coronavirus lockdown, the 60-year-old actor wrote, "I miss them so much." Sanjay Dutt also reminded his Instafam to cherish their time with their respective families - "to everyone who is with their families right now, cherish them," he added. Take a look:

I miss them so muchTo everyone who is with their families right now, cherish them!

Within minutes, Sanjay Dutt's picture was flooded with comments from his family and friends. Reacting to the picture, Maanayata Dutt dropped multiple heart emojis while Sanjay Dutt's daughter Trishala Dutt commented, "Such a pretty pic, daddy."

Earlier this year, in an interview with Times Of India, Sanjay Dutt spoke about how he is using technology to connect with his wife and kids in lockdown. He said, "I am spending a lot of time connecting with my family virtually, which is the most important thing in my life. When the lockdown was announced, unfortunately, Maanayata and my children were already in Dubai. In the past, I have spent periods of my life in a lockdown. Back then and even now, the one thought that stays with me is the way I miss my family. For me, they are everything. Thanks to technology, I can see and talk to them multiple times in a day, and yet, I miss them terribly."

You have always been my source of strength and happiness. Happy Birthday Dad!

Sanjay Dutt was last seen in the Ashutosh Gowariker's war drama Panipat where he shared screen space with Arjun Kapoor and Kriti Sanon. Sanjay Dutt has an impressive line-up of films for this year. He has Sadak 2, Shamshera, Bhuj: The Pride Of India, KGF: Chapter 2, Prithviraj and Torbaaz to look forward to.