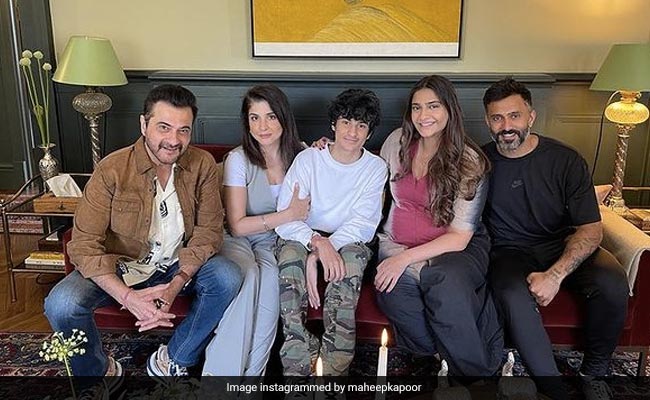 Sanjay Kapoor and Maheep Kapoor, who are currently holidaying in London with son Jahaan, recently visited soon-to-be parents Sonam Kapoor and Anand Ahuja in London. Sanjay Kapoor shared a family picture on his Instagram and captioned it as, "Was so nice to see my beautiful pregnant niece  and Anand at their beautiful home , #family". In the image, all are flashing their million-dollar smile as they pose for the camera. Soon after, Maheep Kapoor also shared a series of pictures, offering a glimpse of the lunch that the couple prepared for them. She captioned the post as, "Afternoon with my beautiful niece , baby bump & Anand #everydayphenomenal #Family"

Sonam Kapoor and Anand Kapoor are currently in London and celebrated the baby shower with family and friends. For the function, Sonam opted for a pink dress while Anand looked dapper in an all-brown outfit. Sharing the pictures on her Instagram handle, she wrote, "It's all starting to feel real! This baby is now well on its way and I'm so thankful to @eieshabp for throwing the best welcoming party ever, bringing together so many of my favourite people and showering me with love and blessings in the most generous and beautiful way."

Sonam Kapoor and Anand Ahuja are expecting their first child. Announcing the pregnancy in March, they shared similar posts on their respective Instagram profiles and wrote, "Four hands. To raise you the very best we can. Two hearts. That will beat in unison with yours, every step of the way. One family. Who will shower you with love and support. We can't wait to welcome you. #everydayphenomenal #comingthisfall2022"

Meanwhile, on the work front, Sonam Kapoor was last seen in AK vs AK.