Sanjana Sanghi Is A "Reflection" Of Her Nani. Read Her Post For Her "Biggest Inspiration"

“You are, and always will be, my biggest inspiration in the world,” writes Sanjana 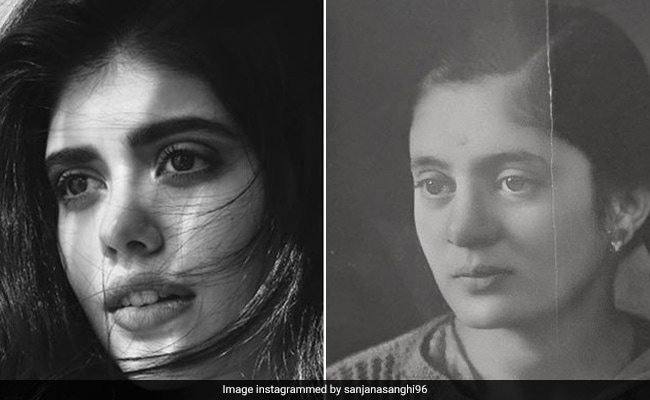 Actress Sanjana Sanghi wrote a heart-touching note remembering her grandmother on the eve of her seventh death anniversary. The Dil Bechara actress fondly remembered her maternal grandmother as a pioneer of education in her time. Sanjana wrote in the note that she shared on Instagram, “You were one of the only girls from your village in Gujarat to go ahead and get a degree in Science at your time, and girls going after education and independence before anything else meant the world to you.” Sanjana shared a black and white collage picture of herself and her nani, both aged 22 at the time the photos were clicked. The actress bears an unmistakably striking resemblance to her maternal grandmother.

The actress further spoke of her grandmother's joy and excitement about Sanjana's first day of college and the beginning of her new journey. She wrote, “It was my first day of college. The day you had always spoken so much about and insisted I celebrated.”

The 24-year-old described her “phenomenal” grandmother as her “biggest inspiration", stating that none could ever be as brilliant as her. In her note, Sanjana went on to admire her grandmother's qualities and said that she herself would be “the happiest girl in the world”, if she could be like her grandmother.

Sanjana wrote, “There can never be anyone as phenomenal as you. The endless generosity of your heart, the sunshine in your eyes and the magnetism of your presence, the clarity of your intent, and the selflessness of your existence. Your belief in the potent power of love. Ma says I'm a reflection of you, I'd be the happiest girl in the world if that were even half true.”

The fervent note received several likes and comments from Sanjana's fans and followers. Actor Vikrant Massey left a red heart emoji on the actress's post in the comments.

Sanjana Sanghi completed her graduation in Journalism and Mass Communications from Lady Shri Ram College in Delhi in 2017. The actress made her debut in the movie Rockstar by Imtiaz Ali at the age of 15. She played the lead opposite late actor Sushant Singh Rajput in the movie Dil Bechara in 2020. Sanjana Sanghi will be seen next in Kapil Verma's Om: The Battle Within where she will play the lead opposite actor Aditya Roy Kapur.