Samantha Ruth Prabhu is seen in a sacred grove of sorts, surrounded by animals in the poster 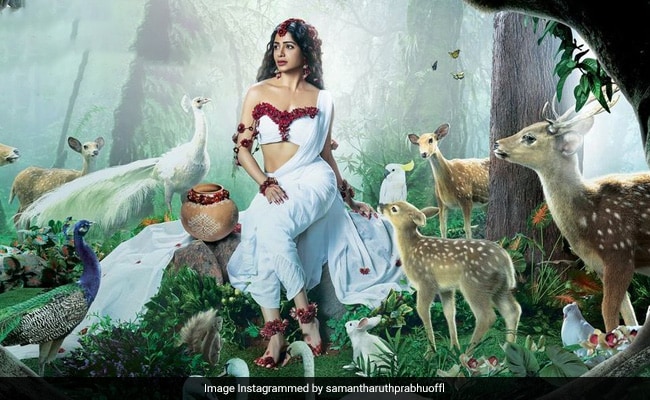 Samantha Ruth Prabhu is moving from strength to strength with each of her new films. After taking the nation by storm with her special dance track, Oo Antava from Pushpa, the actress is ready to prove just how versatile she is with her next big Telugu release. The actress will play the lead role in the mythological drama, Shaakuntalam. The first look poster of the film was shared by the team on Monday. The poster features Samantha Ruth Prabhu in a sacred grove of sorts surrounded by deer, swans and peacocks. The actress looks ethereal as Shakuntala in a white ensemble with floral embellishments and accessories.

Shaakuntalam is based on the Indian play Abhijnanashakuntalam by the great poet Kalidasa. Sharing the poster of the film, Samantha Ruth Prabhu wrote, “Presenting...Nature's beloved…the Ethereal and Demure…Shakuntala from Shaakuntalam.”

In the caption, Samantha Ruth Prabhu also tagged the film's writer-director Gunasekhar.  Neelima Guna and Dil Raju, who are producing the films under the banner of Gunaa Teamworks and Dil Raju Productions respectively, have also been tagged in the post. The post features the hashtags “Mythology For Millennials” and “Epic Love Story”.

While Samantha Ruth Prabhu will play Shakuntala, actor Dev Mohan will be seen in the role of king Dushyanta. Dev Mohan made his debut in the 2020 Malayalam film Sufiyum Sujatayum alongside Jayasurya and Aditi Rao Hydari.

A few months ago, Dev Mohan had shared a set of pictures from the sets of Shaakuntalam, thanking Samantha Ruth Prabhu for her support. “Thank you, Samantha Ruth Prabhu. It was an amazing experience with you…I should say your support during the shoot was remarkable and that really helped me to lift my character… Lots of love Sam.”

Interestingly, the film also marks the debut of Pushpa star Allu Arjun's daughter Allu Arha. Allu Arha will play the role of Prince Bharata in Shaakuntalam. Sharing the news, Allu Arjun wrote on Instagram, “A proud moment for the Allu family to announce that the fourth generation, Allu Arha will be making her debut with Shaakuntalam movie. I want to thank Gunasekhar garu and Neelima Guna garu for giving my daughter this beautiful movie as her debut… I had an altogether different journey with Samantha and am happy to watch Arha debut with her movie.”