This is what Bobby Deol wrote on Instagram while sharing a photo with Salman Khan: "Love you Mamu." 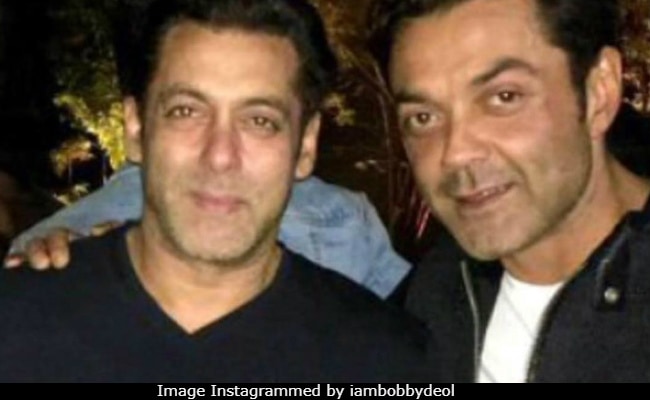 New Delhi: After the verdict on the blackbuck poaching case, Salman Khan's co-stars and well-wishers have flooded social media with blessings and supportive tweets for him. One such post arrived from Bobby Deol, who is all set to share screen space with the 52-year-old superstar in Race 3. This is what Bobby Deol wrote on Instagram while sharing a photo with Salman Khan: "Love you Mamu." Team Race 3, which includes Jacqueline Fernandez, Anil Kapoor, Daisy Shah and Saqib Saleem along with Bobby Deol and Salman Khan, of course, wrapped the Abu Dhabi schedule of the movie earlier this week and jetted back to India. We have much to thank Bobby Deol for, who has been keeping us updated about the Race 3 roster with Instagram posts.

On Thursday, Salman Khan was sentenced to five years in jail after he was declared guilty of killing two blackbuck while filming Hum Saath-Saath Hain in 1998. A day before the verdict, this is how Bobby Deol announced that the Race 3 team have taken off from Abu Dhabi. "On our way back after a great shoot schedule of #Race3 in Abu Dhabi ... Thank you for the love Abu Dhabi," he Instagrammed. Producer Ramesh Taurani also left with the film's cast, who was later spotted visiting Salman Khan's Mumbai residence on Thursday evening.

Salman Khan has been granted bail by a court in Rajasthan's Jodhpur on Saturday. The actor is yet to shoot for the remaining parts of Race 3, which Remo D'Souza is directing. Race 3 is scheduled to hit screens on Eid this year.
Comments
salman khanbobby deol