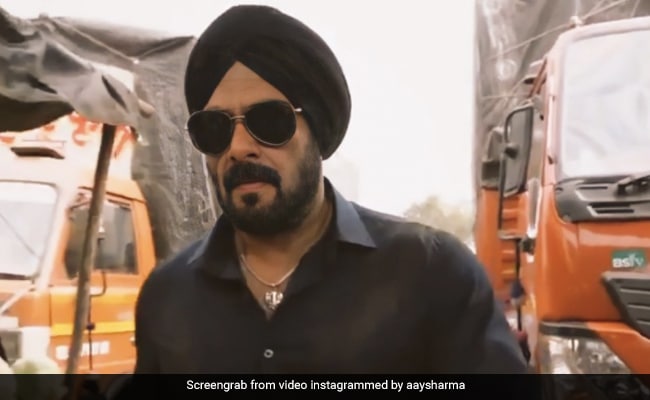 Salman Khan's brother-in-law Aayush Sharma unveiled the 54-year-old actor's first look from his new film Antim: The Final Truth on Wednesday evening and it has sent the Internet into a tizzy. Going by Antim: The Final Truth teaser, shared by Aayush on his Instagram profile, it is safe to say that Salman Khan will play a Sikh man in his upcoming project. In the teaser, the Dabangg actor can be seen sporting a blue shirt, grey trousers, navy blue shirt, a turban and a pair of sunglasses. The video starts with Salman Khan walking towards a vegetable market and later reveals his overall look. Sharing the teaser, Aayush Sharma, who will co-star with Salman Khan in the film, wrote: "Antim begins... #BhaisAntimFirstLook, #AntimTheFinalTruth."

Minutes after Aayush Sharma shared the teaser, it went crazy viral on social media. Several fan clubs dedicated to Salman Khan have been sharing his look as a Sikh man on their respective social media accounts. Comments on Aayush Sharma's post reflect how much Salman fans are excited about the film. "Superb look," commented one user while another wrote: "Salman bhai dashing as always...can't wait to see the film."

Check out the teaser of Antim: The Final Truth here:

Antim: The Final Truth will be directed by Mahesh Manjrekar, who has collaborated with Salman Khan in the past for Dabangg film series. Details about the film have not been revealed yet but it has been reported that Antim: The Final Truth is an adaptation of Marathi crime drama Mulshi Pattern.

Salman Khan was last seen in Dabangg 3. The actor also has Radhe: Your Most Wanted Bhai and Kick 2 lined up.