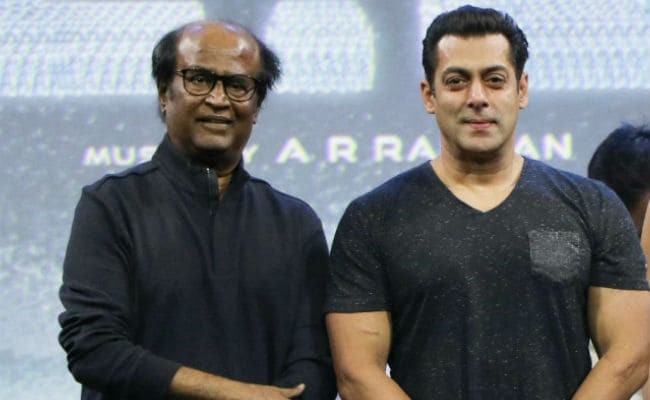 Rajinikanth and Salman Khan in Mumbai.

New Delhi: The top five of Forbes India's 2017 list of 100 celebrities is relatively unchanged from last year, despite the methodology having changed - the rankings are now based on earnings and age instead of earnings and fame. Salman Khan is the topper once again with Shah Rukh Khan, cricketer Virat Kohli and Akshay Kumar at second, third and fourth spots. Sachin Tendulkar moves up a few places from last year to fifth in this, while M S Dhoni correspondingly drops a couple of spots. Notably, Deepika Padukone - whose film Padmavati has been indefinitely delayed - has dropped out of the top 10 - she was sixth in 2016 - to #11, while Priyanka Chopra moves up a place to #7. Aamir Khan moves into the top 10, Amitabh Bachchan drops out of it.

Fans of Rajinikanth (who are legion) will be shocked to discover that the star, surely India's uber-celebrity, places nowhere on the list, after being ranked a poor #30 last year. Rajinikanth's solo film this year, 2.0 with Akshay Kumar, was postponed to 2018 - so next year's list could see him highly-ranked.

Promoted
Listen to the latest songs, only on JioSaavn.com
Meantime, Kareena Kapoor is at 47th spot with Sonam Kapoor and Katrina Kaif at 55 and 56.

Next year's list is unlikely to see an major upheavals at the top - Salman's Tiger Zinda Hai released today and he has Race 3 on the 2018 slate. SRK and Akshay also have big releases planned - Akshay, particularly, has PadMan and 2.0 to look forward to.