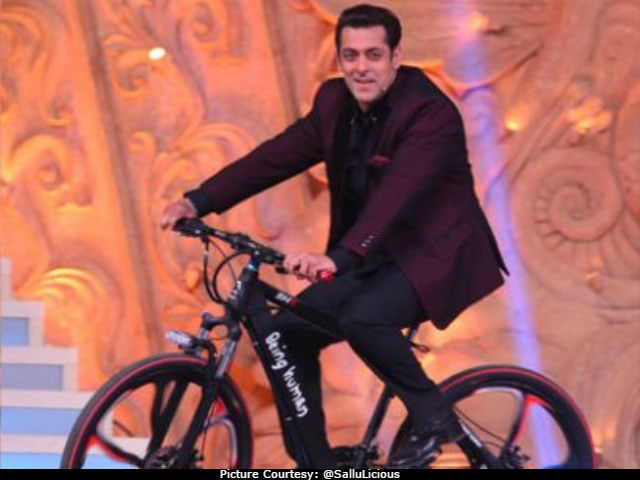 New Delhi: Salman Khan's love for cycling is well known and he has been spotted riding a bicycle quite a times. This time the actor chose to ride on a cycle from his Being Human collection around his Panvel farmhouse on Tuesday evening. The Bajrangi Bhaijaan actor was photographed by his fans and followers, which made its way to the internet. Salman was spotted wearing a sweatshirt teamed with a cap and shades from his Salman Khan Films (SKF). The Dabaang actor was apparently en route to a shoot location and wanted to maintain his fitness regime. Last year, Salman was also photographed cycling with Shah Rukh Khan and his son Aryan in Mumbai, which made headlines instantly.

Salman Khan makes a debut on the first cycle from the Being Human collection - view pic - Bollywood Life https://t.co/qjk1BRSkff#SalmanKhanpic.twitter.com/tJ9t6x9fp5

On the work front, Salman will reprise the role of an Indian RAW agent in Yash Raj Films' Tiger Zinda Hai, which is a sequel of 2012 hit Ek Tha Tiger. The movie, which is now directed by Ali Abbas Zafar, again features Katrina Kaif as the leading lady. The film's first schedule is in Morocco.

Promoted
Listen to the latest songs, only on JioSaavn.com
Before Tiger Zinda Hai, Salman will be seen in Kabir Khan's upcoming film Tubelight, featuring Shah Rukh Khan in a cameo appearance. The film also stars Chinese actress Zhu Zhu. Tubelight has been exhaustively shot in Ladakh and Manali. The film will release on Eid, this year.