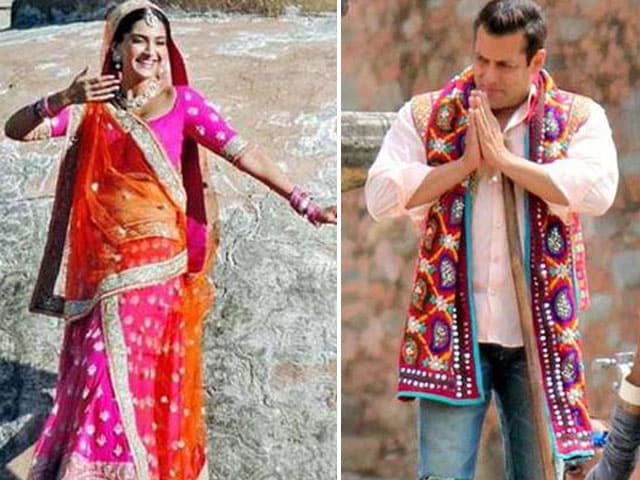 New Delhi: Pictures from the sets of Salman Khan's next film Prem Ratan Dhan Payo have been relatively scarce so, in all likelihood, fans will fall upon this offering from photographer Avinash Gowariker, brother of filmmaker Ashutosh. (Also Read: Prem Ratan Dhan Payo Will Bring Back My Innocence: Salman)

Mr Gowariker, who has shot the stills for several of the 49-year-old actor's films including No Entry and Mujhse Shaadi Karogi, tweeted a photo of Salman and his co-star Sonam Kapoor:

The group includes director Sooraj Barjatya, who directed Salman in his earliest blockbusters - Maine Pyar Kiya, Hum Aapke Hain Koun and Hum Saath Saath Hain, the films that were responsible for the rise of Salman's Prem persona. This will reunite Salman with the Barjatyas 15 years after 1999's Hum Saath Saath Hain.

Sonam, dressed in gota-embellished lilac in the picture, is playing Salman's heroine for the second time, after her debut film Saawariya in which he made a special appearance.

Salman will, apparently, be seen in the double role of a prince and a commoner in Prem Ratan Dhan Payo. Produced by the Barjatya-owned Rajshri and distributed by Fox Star Studios, the film releases this Diwali and also features Anupam Kher, Swara Bhaskar, Deepak Dobriyal and Armaan Kohli in key roles.