Salman Khan on 'Shah Rukh Pakistani Agent' Comments: We Are All Indians 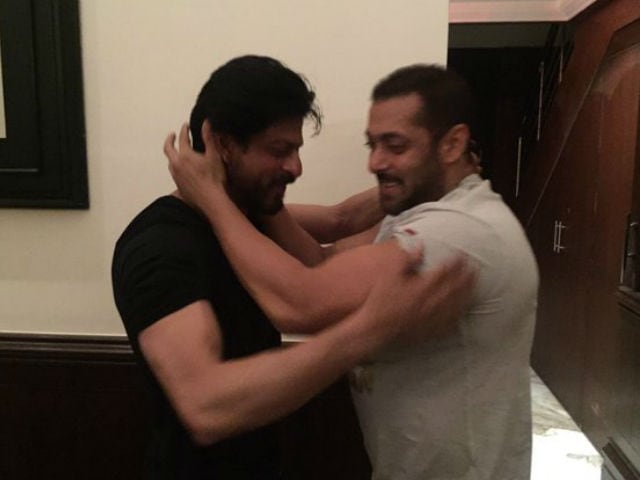 New Delhi: It was team Prem Ratan Dhan Payo's day out in Delhi and the NCR on Wednesday. Though fashionably late by three hours, Salman Khan and Sonam Kapoor arrived at a university campus in Noida. They were caught unawares by the sea of fans jostling to catch a glimpse of them. (Also Read: Shah Rukh Khan is an Icon, #IStandWithSRK, Tweets Film Fraternity)

Patient and quite upbeat after a three hour-wait, the students and fans were treated to a jig as Salman and Sonam took to the stage dancing to the title track from their film, which is also a rage on social media.

Salman refrained from making any comment about the controversy surrounding their friend, actor Shah Rukh Khan who was called a 'Pakistani agent' and compared to 26/11 mastermind Hafiz Saeed by BJP leaders Kailash Vijayvargiya, Sadhvi Prachi and Yogi Adityanath.

Instead, he asked people to 'think over it' themselves the press conference of the film.

The actor, 49, said, "This is not the platform. Let's discuss the film. But when probed even more, the actor replied curtly to people, saying, "Aap Khud Socho. We all are here, does it make a difference? Who is sitting here, does it matter to you? You asked me a question. It did not matter. We all are Indians."

Sonam, dressed in a Payal Pratap creation, said, "Anything that is intolerant or that is said without complete evidence is unacceptable, so people just saying things in the name of religion, class, creed is disgusting and I think we should rest what we have to say at that point."

The actress will be back in Delhi on Saturday to launch an American apparel brand.

Meanwhile, Salman, who seemed irritated with the volley of questions on intolerance, kept veering the conversation towards Prem Ratan Dhan Payo.

"It will not disappoint," the actor, 49, said. So, hopefully Salman can look forward to a crackling Diwali at the box office.