"Zaheer Iqbal is made for the movies. He is a fantastic actor and a born star," said Salman Khan 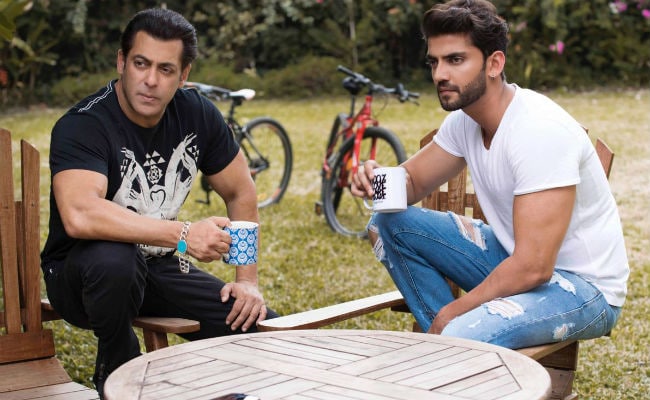 New Delhi: Mystery solved. It is newcomer Zaheer Iqbal, who was spotted in Salman Khan's throwback photo recently and it's him who the Race 3 actor is launching in his next production venture. The film will be a love story set in Kashmir. There's no scope for a nepotism debate here as Zaheer Iqbal doesn't belong to a filmy lineage but a statement revealed that Zaheer's father Iqbal Ratnasi and Salman have been acquaintances for years. In a tweet on Thursday morning (as promised) Salman introduced Zaheer like this: "How these kids grow up so soon... always keep giving your best Zahero no matter what. Stand tall and always bend backwards for those you love and those who love you, Yeh yaad rakhna that the most important thing in life is respect and loyalty."

How these kids grow up so soon... ALWAYS keep giving your best #ZAHERO no matter what. Stand tall and always bend backwards for those u love and those who love u, Yeh yaad rakhna that the most important thing in life is Respect and Loyalty. @iamzaheropic.twitter.com/xmn3RXklRk

It is interesting how Salman was Zaheer were introduced for the first time - Salman spotted Zaheer performing at his sister's wedding and he identified him as a potential Bollywood star, the statement revealed. Zaheer Iqbal's Bollywood debut, which is yet-untitled, will go on floors in September and will be co-produced by Salman Khan Films and Murad Khetani and Ashwin Varde of Cine1 Studios. The hunt for an actress opposite Zaheer is on and the makers are only looking for a fresh face. Zaheer's maiden Bollywood film will be directed by Nitin Kakkar, who helmed Filmistaan.

Salman, who has named the aspiring actor Zahero, has been supervising Zaheer's training sessions and said: "Zaheer is made for the movies. He is a fantastic actor and a born star." The producers also are optimistic about Zaheer's debut: "Zaheer has an incredible presence in front of the camera," said Murad Khetani while Ashwin Varde added: "Zaheer's greatest asset is his honesty towards the craft." An excited Nitin Kakkar said: "Zaheer's level of commitment towards his work is great. He will go a very long way."

Promoted
Listen to the latest songs, only on JioSaavn.com
Meanwhile, here's what we know from Zaheer Iqbal's unverified Instagram profile - he's a model, a sports junkie, a fitness enthusiast and is followed by Salman Khan's sister Arpita Khan Sharma and Iulia Vantur and has featured with Salman in a photos shared in the recent past.

Zaheer Iqbal is also rumoured to have been dating actress Sana Saeed, who played the role of Shah Rukh Khan's daughter Anjali in Kuch Kuch Hota Hai in 1998 and then Alia Bhatt's classmate in 2012's Student Of The Year.