Salman Khan And Niece Ayat In A Birthday-Special Pic

How cute is this picture of Salman Khan and Ayat 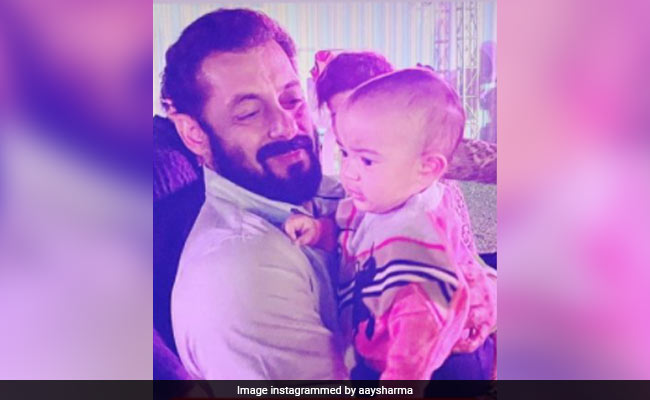 It was a happy, happy day in Salman Khan's house on Sunday. Salman Khan celebrated his 55th birthday while his niece Ayat Sharma turned 1. Ayat's father and Salman Khan's brother-in-law Aayush Sharma (married to Arpita Khan Sharma) shared a priceless picture of Salman Khan and Ayat on his Instagram stories. In the picture, Salman Khan can be seen smiling with all his heart as he admires his niece Ayat. Cute can't even begin to describe the picture and let's just say that it has our heart. Arpita Khan Sharma and Aayush Sharma, who got married in 2014, welcomed Ayat on Salman Khan's 54th birthday. The coupe are also parents to a son named Ahil. Meanwhile, Aayush Sharma shared a special post on his daughter Ayat's birthday. He wrote: "Happy Birthday my Ayat... It's been 1 year since you've come into our lives. You've brought so much of love and happiness into our lives. From the unconditional, 'Papa' love to the judgmental looks, you have really helped me evolve into a better person and a more responsible father. May you always keep the sparkle in your eyes. May you always spread love with your beautiful smiles... May you always get what makes you happy. I'm blessed to have you in my life. It's true, One day you'll outgrow my arms but you'll never outgrow my heart."

Aayush Sharma also posted an equally adorable note for Salman. He wrote: "Happy Birthday Bhai. Thank you for always being there ... In the past few years you have blessed me with so many memories and stories. You're not only an inspiration as an artist but more importantly as a human being. PS_ This photo is really special because this I shot when I was just learning photography... I was struggling with it. I remember you telling me, 'when you think you're a bad photographer just point the camera at me, I'll make your photo look good'."