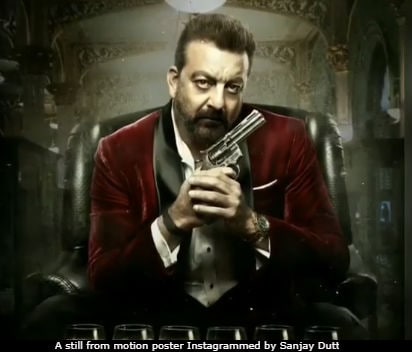 Actor Sanjay Dutt announced that he plays the titular gangster in Tigmanshu Dhulia's upcoming film Saheb, Biwi Aur Gangster 3 on Tuesday. The Khalnayak actor shared the first motion poster of Saheb, Biwi Aur Gangster 3 and promised that the film will be three times "more intense." The motion poster introduces Sanjay Dutt, who is dressed in a tuxedo and looks dangerous with a gun in his hand. He wrote: "Jee haan Main Hun Khalnayak... Ab Ban Gaya Hun Gangster! The story has just begun and it's three times more intense now." Sanjay Dutt previously played the role of a gangster in films like Vaastav and Kaante among others.

Earlier this year, Sanjay Dutt tweeted about the release date of the film. This is what Sanjay Dutt wrote:

#SahebBiwiAurGangster3 to hit the screens on 27th July, 2018. Mark the date!
Produced by @rahulmittra13, Directed by @dirtigmanshu and Presented by @rajuchadhawavepic.twitter.com/9OvD9QxaLB

The film also features Nafisa Ali, who will be seen playing the role of Sanjay Dutt's mother in the film. "Am excited to be playing Royalty. As the cast are old friends -shooting outdoor amazing - Tigmanshu you saw the potential in me so I am happy," Nafisa Ali had tweeted. Besides, we are to witness the collaboration of Kabir Bedi and Sanjay Dutt after a span of over three decades. The actors were last seen together in Yalgaar. Though little is known about the plot, we know Jimmy Shergill, Mahi Gill and Chitrangada Singh also play pivotal roles in the film.

Promoted
Listen to the latest songs, only on JioSaavn.com
Sanjay Dutt was last seen in Bhoomi, which released in 2017. His role in Saheb, Biwi Aur Gangster 3 is totally different from his last release, where the actor played Aditi Rao Hydari's onscreen father.

Meanwhile, Sanjay Dutt will be co-starring with Madhuri Dixit, Varun Dhawan, Alia Bhatt and Aditya Roy Kapur in Karan Johar's Kalank. The actor is also reviving his production firm after a gap of seven years with the Hindi remake of Telugu film Prasthaanam, which stars Manisha Koirala and Jackie Shroff. The actor will also be part of Ashutosh Gowariker's film on the Third Battle of Panipat (Panipat).