Saaho had recorded an impressive opening day score of Rs 24 crore and made over Rs 54 crore during its first weekend. 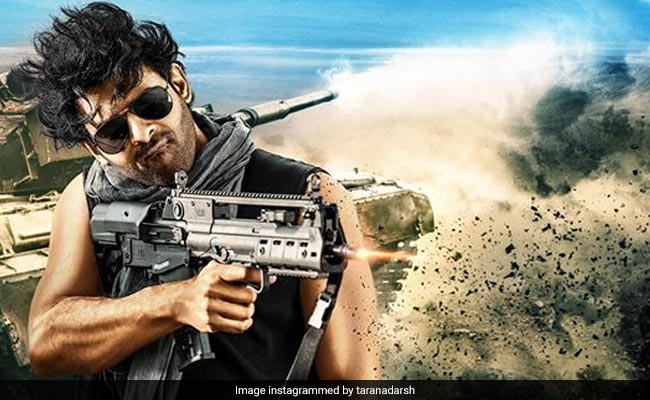 Prabhas in a still from the film (courtesy taranadarsh)

Saaho, which heavily banked on Prabhas' star-power, has scored Rs 130.98 crore in 10 days, reported trade analyst Taran Adarsh, who is tracking the Hindi version's box office numbers. Saaho's graph at the box office witnessed a sharp dip on its second weekend - Mr Adarsh reported a decrease in ticket sales by 81.10 per cent as compared to its first weekend numbers. "Saaho had an excellent Week 1 due to Prabhas' popularity, but declined 81.10% in Weekend 2 [vis-a-vis Weekend 1]... Mass circuits strong in Weekend 2, biz dropped at multiplexes... [Week 2] Fri 3.75 cr, Sat 4.60 cr, Sun 6.60 cr. Total: Rs 130.98 cr," he wrote for the Hindi version of Saaho.

Saaho had recorded an impressive opening day score of Rs 24 crore and made over Rs 54 crore during its first weekend. Saaho signed up for the Rs 100 crore club within just five days of its release. In its first week, Saaho made Rs 116 crore while in its second weekend the numbers read Rs 14.95 crore. Saaho was joined by new release Chhichhore last Friday, which made Rs 35 crore in three days.

South actor Prabhas shot to the pinnacle of fame after headlining the Baahubali series of films. Saaho was a much-awaited movie as it is Prabhas' first project after Baahubali: The Conclusion. Directed by Sujeeth, Saaho also released in Tamil, Telugu and Malayalam, marking Shraddha Kapoor's debut stint in the Telugu film industry.

However, after its release, Saaho was criticised for plagiarism. French director Jerome Salle accused the makers of Saaho of copying his film Largo Winch just days after Lisa Ray alleged them of plagiarising illustrator Shilo Shiv Suleman's work.