RRR: Jr NTR's Bheem is portrayed as a larger than life character with extraordinary physical strength. 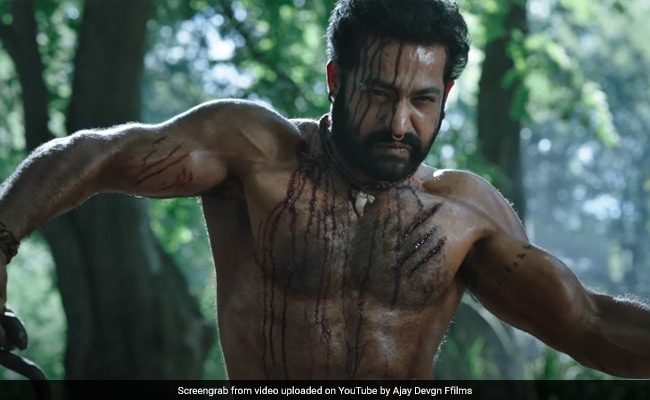 Finally the wait is over for Jr NTR's first look as Bheem from SS Rajamouli's RRR. And, there's no one better to introduce Jr NTR as the "mighty Bheem" than his RRR co-star Ram Charan. RRR based on the fictional story of two revolutionaries from pre-independence era, set in 1920. Jr NTR features as revolutionary tribal leader Komaram Bheem while Ram Charan has been cast as revolutionary Alluri Sitarama Raju. Actors Alia Bhatt and Ajay Devgn are also part of the main cast, who too, cheered for Jr NTR's first look as Bheem: "Bheem ke baare mein batane ke liye hamare Ramaraju se behtar aur kaun ho sakta hai? Introducing our Bheem to you all," they wrote.

But it's Ram Charan's tweet that makes it special: "Finally, here's the mighty Bheem! A befitting return gift to you my dear brother." In the teaser, Bheem is portrayed as a larger than life character with extraordinary physical strength. Bheem has a special connect with the forces of nature and his courage knows no bounds. The teaser ends on a cliff-hanging note, keeping the mystery alive, which is SS Rajamouli's signature move.

Jr NTR's first look was supposed to release on the actor's birthday in May, which however, was delayed as production was shut off because of the coronavirus situation. On Ram Charan's birthday earlier this year, Jr NTR had introduced Ramaraju like this:

Ajay Devgn will reportedly play onscreen mentor to Ram Charan and Jr NTR's characters. Alia has been roped in to play the role of Sita, Ramaraju's love interest. RRR is expected to hit screens on January 8, 2021.